Her mysterious smile has captivated art lovers for 500 years, but now an expert claims to have revealed a secret hidden underneath Leonard da Vinci’s famous masterpiece.

Pascal Cotte, a French engineer who has analysed the painting, says he has discovered another portrait beneath the existing painting by using a technique called reflective light technology.

He claims it shows an earlier image of a sitter looking to one side, which may be the original portrait of Lisa del Giocondo, who also known as Lisa Gherardini – the woman who is thought to be the model for the Mona Lisa. 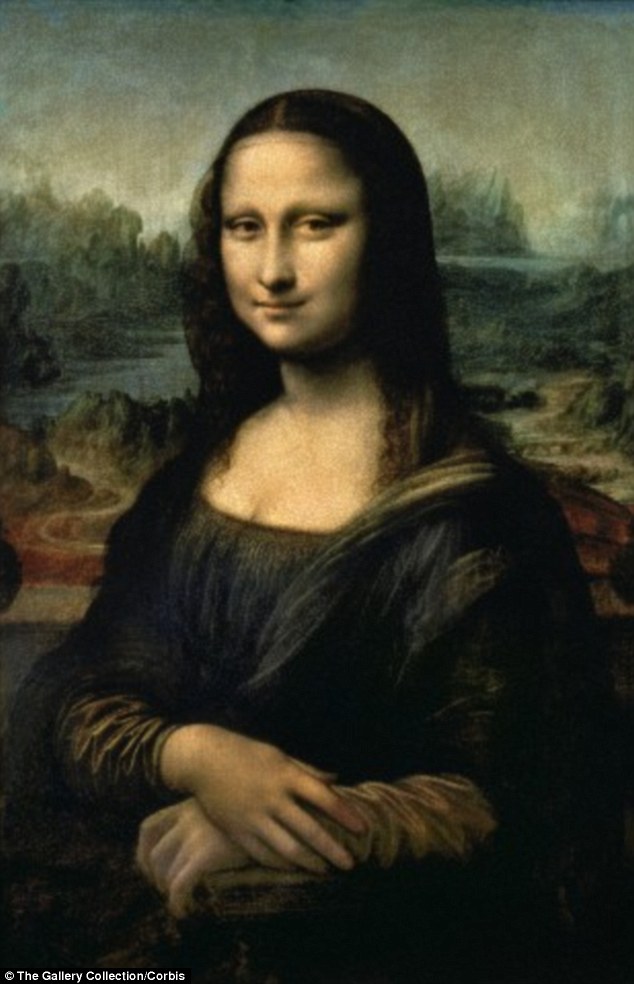 Pascal Cotte says he has discovered another portrait beneath the existing painting of the Mona LIsa (pictured) by using reflective light technology. He claims it shows an earlier image of a sitter looking towards one side who may be the original portrait of Lisa del Giocondo

But not everyone is convinced and the Louvre Museum, where the priceless painting is on public display, has declined to comment on the claims.

As well as the mystery of the Mona Lisa’s identity, there are theories that da Vinci painted more than one version and there are conflicting dates about when the painting was commissioned and finished.

A new documentary called ‘Secrets of the Mona Lisa,’ which will air at 9pm on BBC on December 9, is aiming to shed light on some of these mysteries using new research and technology.

Da Vinci is believed to have worked on the painting between 1503 and 1517 and for centuries, it has been believed the woman with the enigmatic smile is Lisa del Giocondo, the wife of a Florentine silk merchant. 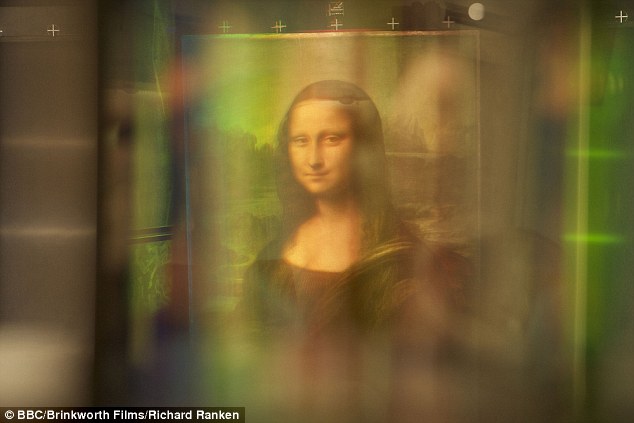 One of the techniques used is the Layer Amplification Method, (LAM) which involves projecting a ‘series of intense lights’ on a painting to reveal what lies beneath what is visible to the naked eye. A camera is used to project 13 different wavelengths of colour onto a picture, each penetrating the paint surface to different depths 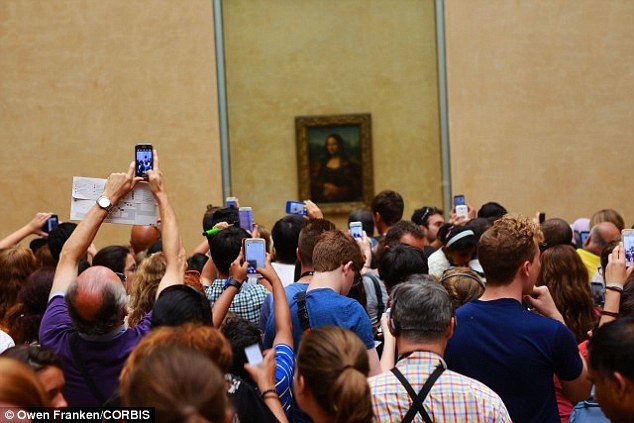 Da Vinci is believed to have worked on the painting between 1503 and 1517 and for centuries, it’s been believed that the woman with the enigmatic smile is Lisa del Giocondo, the wife of a Florentine silk merchant. The portrait attracts thousands of visitors at The Louvre where it is on show (stock image)

WHO WAS THE MONA LISA?

Lisa del Giocondo is thought to have posed for the painting between 1503 and 1506.

Not much is known about her life. Born in Florence and married in her teens to a cloth and silk merchant who later became a local official, she was mother to five children.

It is believed Francesco del Giocondo commissioned the portrait to celebrate either his wife’s pregnancy or the purchase of a house around 1502 and 1503.

After his death, Gherardini became a nun. She died in 1542 at the age of 63 and was said to be buried near the Sant’Orsola convent’s altar.

In 2014 scientists conducted a DNA test on bones found at the convent which they believe belonged to Lisa del Giocondo but the results are still to be released.

Presented by art historian, Andrew Graham-Dixon, the new programme will embark on an investigation using the latest optical, forensic and historical tools to examine new evidence that the painting hanging in the Louvre may not be the original Lisa.

One of the techniques used is the Layer Amplification Method, (LAM) which involves projecting a ‘series of intense lights’ on a painting to reveal what lies beneath what is visible to the naked eye, the BBC reported.

It was pioneered by Mr Cotte, founder of Lumiere Technology, who in 2004 was granted access to scan the Mona Lisa.

A camera is used to project 13 different wavelengths of colour onto a picture, each penetrating the paint surface to different depths.

It then measures the light reflected by these layers, generating over three billion bits of data and thousands of images.

From that data, a reconstruction of what’s in between layers of paint can be made.

Mr Cotte claims his technique is able to find layers undetected by other tests.

In a previous study, Mr Cotte worked with academics from French universities to reveal the original colours the Mona Lisa had been after it had been painted. He has also used the technique to study the ‘smoky’ sfumato style used to achieve the paintings enigmatic smile. 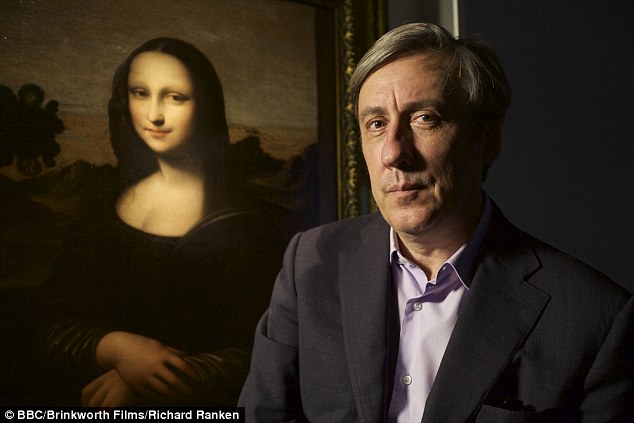 Presented by art historian, Andrew Graham-Dixon (pictured), the new programme will embark on an investigation using the latest optical, forensic and historical tools to examine new evidence that the painting hanging in the Louvre may not be the original Lisa

But in the latest findings from his study of da Vinci’s work, he said there are three different paintings beneath the Mona Lisa. These have yet to be revealed before the TV show airs.

One is claimed to be an early study of a head and another is a Madonna-style portrait with an extraordinary headdress.

But the most surprising finding is the third ‘hidden portrait’.

He claims that this find finally resolves one of the Mona Lisa mysteries – that da Vinci painted more than one portrait of Mona Lisa and it lies underneath the one we all recognise in The Louvre.

He says the earlier hidden image is da Vinci’s original portrait named Mona Lisa and it could be a different woman to the one we recognise in the painting in The Louvre.

‘The results shatter many myths and alter our vision of Leonardo’s masterpiece forever,’ he said.

WATCH THE MONA LISA COME TO LIFE: INTERACTIVE VERSION SEES HER FROWN, TURN HER HEAD AND EVEN BREATHE

Computer technology has been used to bring the Mona Lisa to life like never before.

An interactive version of the famous painting by Leonardo da Vinci allows her to turn her head, pucker her lips, frown and even breathe.

The Living Mona Lisa project, or Living Joconde as it is known in France, uses artificial intelligence to transform the oil painting into a living, moving work of art.

While it does not perhaps tell us anything new about the woman in the painting – thought to be Lisa Gherardini – it perhaps lets viewers see her as da Vinci did while she posed for him.

The living painting uses motion sensing devices to pick up movements in the room, triggering reactions and ‘mood’ changes in the digital Mona Lisa.

The team behind the project, which consisted of 40 technicians and artists, plan to produce digital Mona Lisas in a variety of sizes and formats, including miniature versions that can be placed on pendants.

Florent Aziosmanoff, who came up with the original concept, told the Telegraph: ‘Now she can sense changes in her surroundings.

‘This is primarily an artistic project, not a commercial one, but we want to make paintings cheap enough for tourists to buy and take home as a souvenir.’

‘When I finished the reconstruction of Lisa Gherardini, I was in front of the portrait and she is totally different to Mona Lisa today. This is not the same woman,’ he told the BBC’s Roya Nikkhah.

The programme will show the earlier portrait, demonstrating for the first time exactly what the young Mona Lisa ‘really looked like,’ both digitally and with the help of a model and Renaissance costume historian.

Experts will also explain how da Vinci painted, scratched out and then repainted all three works, revealing how the features changed and how the old work was camouflaged and hidden.

However, Mr Cotte’s revelations have already divided the art world.

Martin Kemp, Emeritus Professor of the History of Art at the University of Oxford told Ms Nikkhah: ‘They [Cotte’s images] are ingenious in showing what Leonardo may have been thinking about.

‘But the idea that there is that picture as it were hiding underneath the surface is untenable.’

He disagrees the different stages of the painting represent different portraits, but thinks they are more likely to show how the final painting evolved.

She explained that in many cases artists started with a sketch and changed things while painting. ‘That would be the most likely thing,’ she said.

‘Based on my knowledge of painting processes, it looks like more of a development of a final portrait.’

Dr Hermens has seen what appears to be the scans and says the portrait underneath said to depict Lisa Gherardini still resembles the face in the Mona Lisa, suggesting the final work is an evolution of the original.

She cautioned that it is hard to compare a bright computer-generated image to an original work of art, especially one such as da Vinci’s masterpiece which has a thick layer of yellow-tinged varnish, likely obscuring details and colours.

‘Computer images still have to be interpreted with context from the time of da Vinci,’ she said.

However, Graham-Dixon said: ‘I have no doubt that this is definitely one of the stories of the century.’

He suggested there will be reluctance to accept the findings because it means the painting should be re-named.

Researchers examining an earlier painting by the Renaissance master claim to have unravelled the painter’s secret to creating an ‘uncatchable smile’.

The study reveals how La Bella Principessa, painted by da Vinci before he completed the Mona Lisa in the late 15th Century, uses a clever trick to lure in the viewer. 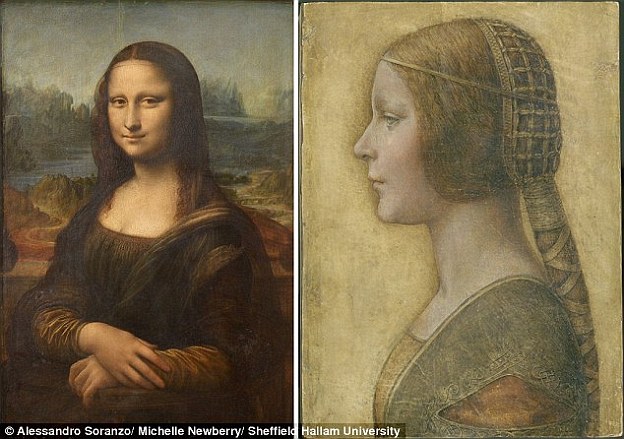 The study reveals how La Bella Principessa (pictured right), painted by da Vinci before he completed the Mona Lisa (left) in the late 15th Century, uses a clever trick to lure in the viewer

When viewed directly, the slant of the mouth is distinctly downwards, according to the research by scientists at Sheffield Hallam University and Sunderland University.

As the viewer’s eye wanders elsewhere to examine other features, however, the mouth appears to take an upward turn, creating a smile that can only be seen indirectly, much like the Mona Lisa’s.

The technique is called sfumato, and can be seen in both the Mona Lisa and La Bella Principessa.

And while other artists have attempted to use the same technique, none have done so as expertly as da Vinci, the researchers claim.

‘As the smile disappears as soon as the viewer tries to ‘catch it’, we have named this visual illusion the ‘uncatchable smile,’ researchers Alessandro Soranzo and Michelle Newberry of Sheffield Hallam University wrote in a paper published in the journal Vision Research.