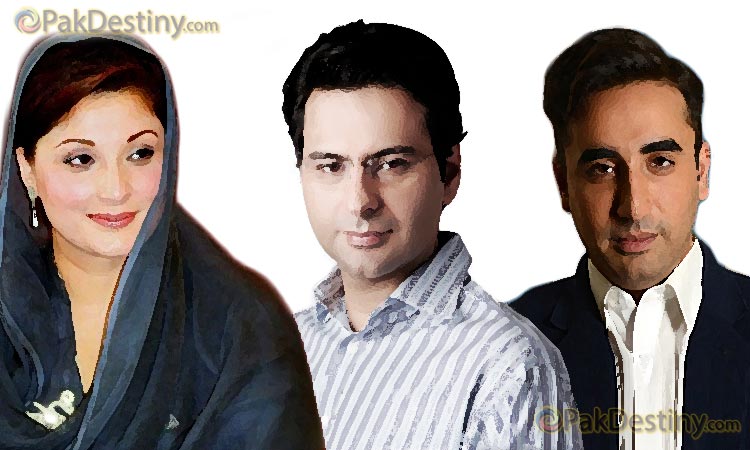 (Pakdestiny.com – Exclusive) Most scions of Pakistani politicians hardly had ever given a ‘penny’ in charity especially during the times of crisis like earthquake and floods.

With one exception — Moonis Elahi, son of former deputy prime minister Chaudhry Pervaz Elahi, neither Maryam Nawaz (a strong candidate of prime minister), Hasan Nawaz and Hussain Nawaz (children of Prime Minister Nawaz Sharif), Hamza Shahbaz and Salman Shahbaz (sons of Punjab Chief Minister Shahbaz Sharif — also the scions of Sharif dynasty — nor Bilawal Bhutto Zardari (lone son of slain premier Benzir Bhutto), Bhakhtawar Bhutto and Aseefa Bhutto – scions of Bhutto dynasty — ever paid a single penny from their pocket for any project meant for the people or donated anything for affected people of any calamity.

As the Chaudhrys of Gujrat is know for their generosity the young Moonis not only recently donated Laparoscopy Machine to Aziz Bhatti Hospital Gujrat but also gave away Rs30million in charity to the needy of the Gujrat. Although the PML issued the news of his giving away Laparoscopy Machine worth about Rs1million to Aziz Bhatti Hospital Gujrat but it did not disclose his other charitable activities. A local daily of Gujrat wrote about as how a number of needy people are getting financial help from Moonis Elahi. 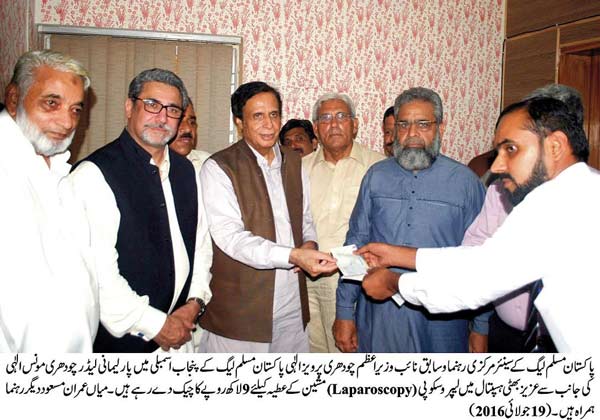 But surprisingly, in the case of the scions of political dynasties of the Sharifs and Bhuttos we have hardly found them giving away a single penny from their pockets. Take example of Maraym who is reportedly heading a media cell in the PM House and a strong candidate for the slot of PM on the platform of the PML-N, had neither paid a visit to the people hit be floods or earthquake in Pakistan nor paid anything to the affected people from her own pocket. Although she claims she does not do any business or has any property but Panama Papers of late had revealed that she has stakes in the off-shore companies. Bilawal who inherited billions of rupees could not even pay a penny from his pocket to the people of Tharparkar which are in dire straits. Bilawal usually visits calamity hit areas and thank God he at least orders paying from the kitty of the Sindh government to the affected people and their rehabilitation. Bakhtawar and Aseefa are also no exception in this respect. When it comes to the Sharif dynasty — one wonders as why its scions always shy away from charitable works. As people least expect from Hasan Nawaz and Hussain Nawaz who are abroad to do some charitable work but Hamza Shahbaz and Salman Shahbaz cannot absolve themselves of this duty. While Nawaz Sharif and Shahbaz Sharif talk a lot about serving the people from the national kitty … has anyone ever found them giving away something in charity from their personal funds and assets. If not how come their children adopt a different course. It is said charity begins at home. — Pak Destiny