A student who was branded a ‘fake’ after posting incredible before and after photos revealing her dramatic eight stone weightloss has hit back at online trolls.

Abigail Peters, from Cardiff, says she tipped the scales at 16st 8lbs just six months ago but hired a personal trainer to get in shape after being inspired by other people’s stories on social media.

The 20-year-old now claims she has lost more than half her body weight to become a svelte size six, thanks to grueling workouts and a strict diet.

Abigail Peters, a 20-year-old maths student from Cardiff, weighed 16st 8Ib before her dramatic weight loss. She is now a size six and claims she shed the pounds in just six months 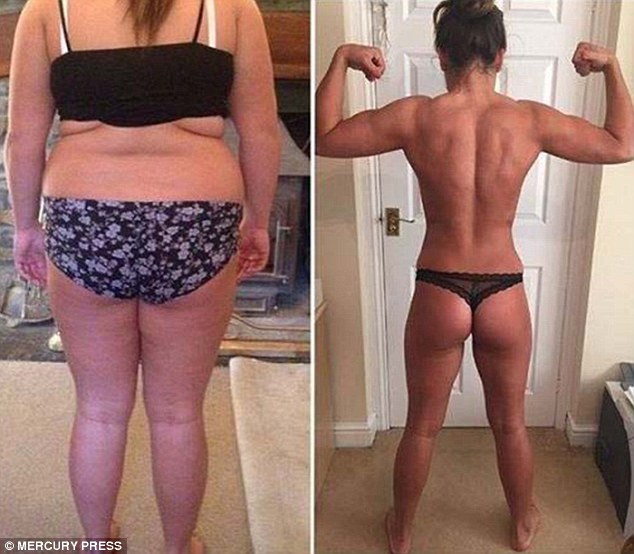 But the maths student, who now weighs 8st 2Ibs, was left shocked and upset by the reaction of people on social media, who accused her of airbrushing selfies showing her amazing transformation.

She said: ‘I’ve used Instagram for my fitness inspiration for years and that was what finally made me decide to lose the weight. I’d look at pictures of Jennifer Lopez and Khloe Kardashian and be desperate to have their abs and toned figures.

‘I was really proud to be able to share my photos once I’d reached my target weight and size, so I was shocked when people accused me of being a fake. They were just keyboard warriors who didn’t even know me, but I suppose I should take it as a compliment.’ 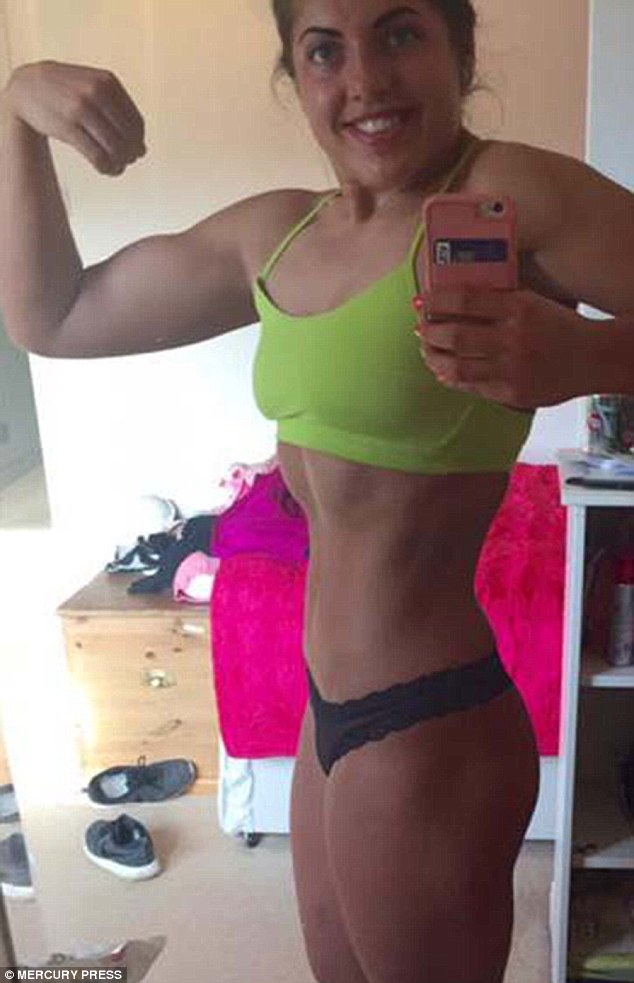 She was proud to share photos of her achievements, but was shocked to find that trolls on social media accused her of airbrushing her images

Abigail said she decided to take the plunge earlier this year after putting on weight over the 2014 Christmas period.

She was working part-time in her parents’ boarding kennels, but otherwise did no physical activity before signing up with personal trainer Ryan Evans.

Abigail said: ‘I have always struggled with my weight and had a yoyo diet. I would lose weight quickly and it would go back on. I would even try fasting but end up heavier than I was before.

‘After Christmas I got even bigger and I got so upset when I saw other people’s transformations. I just wanted to be a size 12, but up until that point I had eaten anything I wanted. 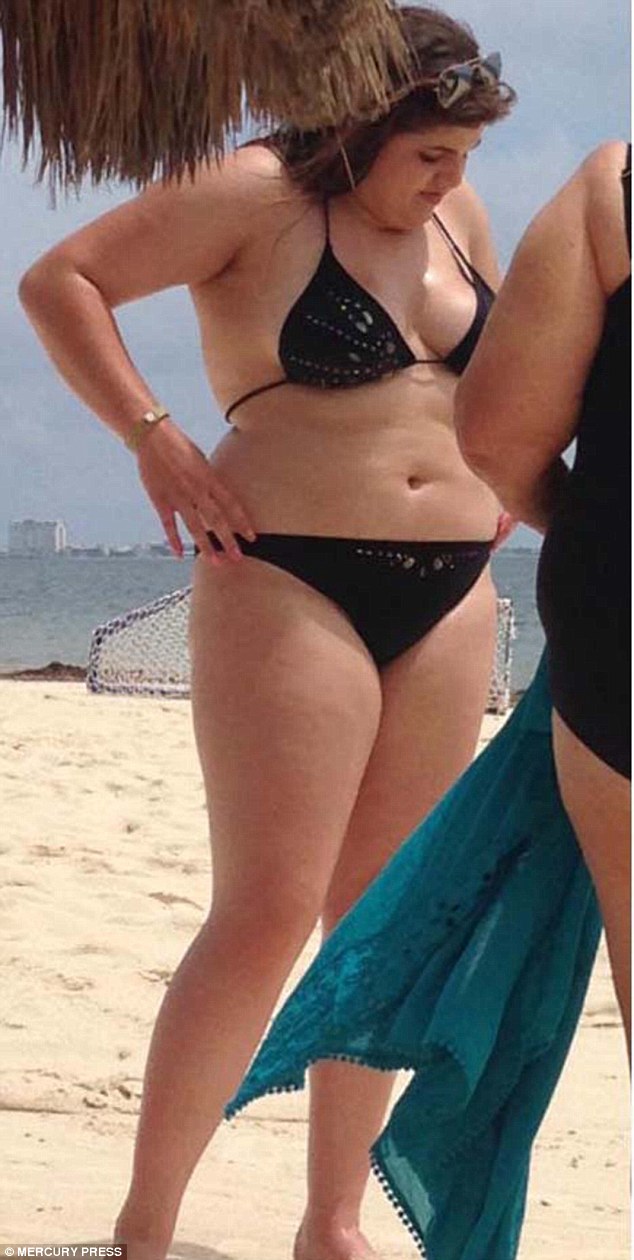 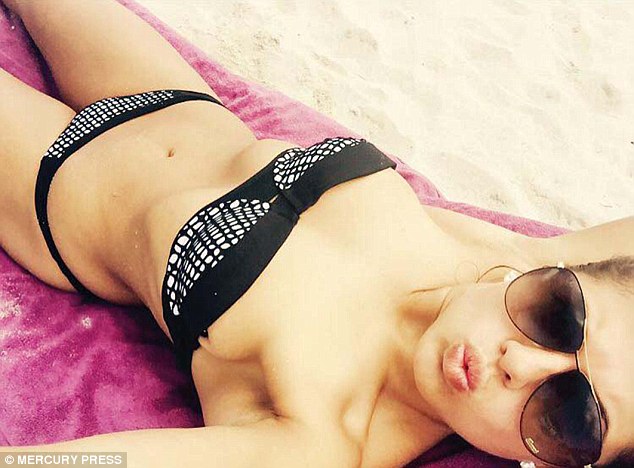 She couldn’t look more different in a bikini now, but selfies such as this has left Abigail open to accusations that she’s a ‘fake’

Another person on Facebook accuses Abigail of being a ‘fake’ – but they were quickly put in their place by another user, who said people should respect her amazing efforts

‘I would have full-fat drinks from Starbucks, McDonald’s for lunch, takeaways in the evening. My mum and dad would nag me to eat more healthily but my weakness was going out for a cheeseburger. I had just learned to drive and I never walked anywhere.

‘During my first session with Ryan, I was absolutely petrified and couldn’t stop giggling because I was nervous. I was mainly doing weights from then on. That made sure I wouldn’t have saggy skin or stretch marks as I was toning up my skin.

‘We did something different every time but he was definitely taking the ‘cruel to be kind’ approach. It doesn’t suit everyone but I needed someone strict. 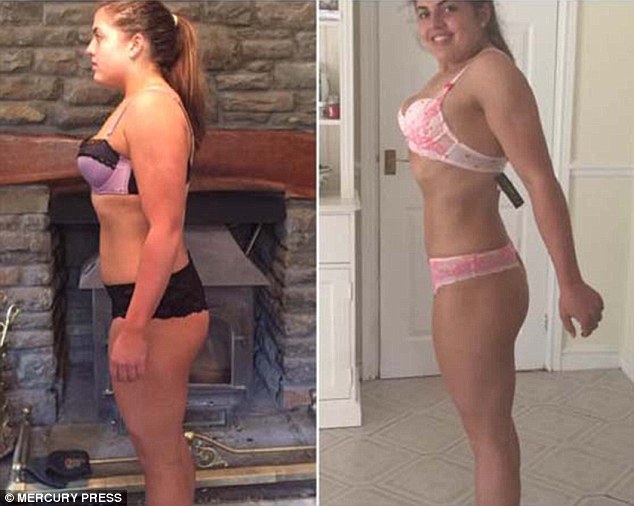 Her target weight was a size 12, but Abigail quickly got down to a size 6 – a result she never anticipated

‘I did the diet plan Ryan created for me over a few months. I would have bacon, eggs and cheese for breakfast, chicken or fish salad for lunch and yoghurt with dark berries.

‘In the last few months I swapped to his nutrition programme called Tactical, where you can eat whatever you want provided you get the correct amount of protein for your size and weight.’

After hitting her target of fitting into a dress size 12 in just eight weeks, Abigail then dropped another three dress sizes and weighed just 8st 2lb by August.

After hitting her target of fitting into a dress size 12 in just eight weeks, Abigail then dropped another three dress sizes and weighed just 8st 2lb by Augus 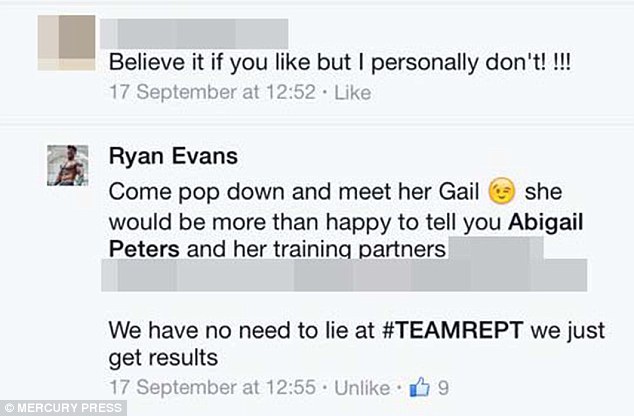 Another Facebook user says they don’t believe the before and after shots, only for Ryan to tell her to go and meet Abigail herself 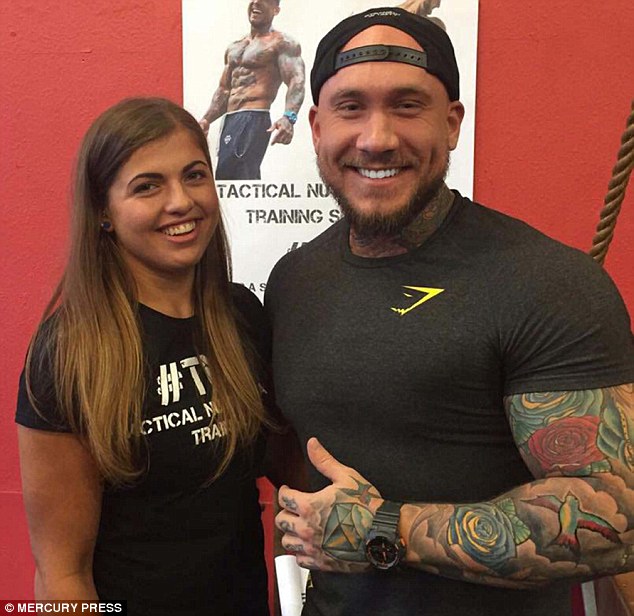 Abigail with her trainer Ryan Evans, who pushed her to achieve the incredible results

Though she’s received mostly praise and encouragement for her Instagram transformation photos, others don’t believe the pictures are genuine.

One comment said: ‘Anyone else thinks that looks Photoshopped?’

Another commenter said: ‘You can’t do this in eight months.’

Abigail said: ‘Being accused of Photoshopping my pictures was a bit upsetting at first but after a while I was flattered. All my friends backed me up as they know the pictures are real and how hard I’ve worked. 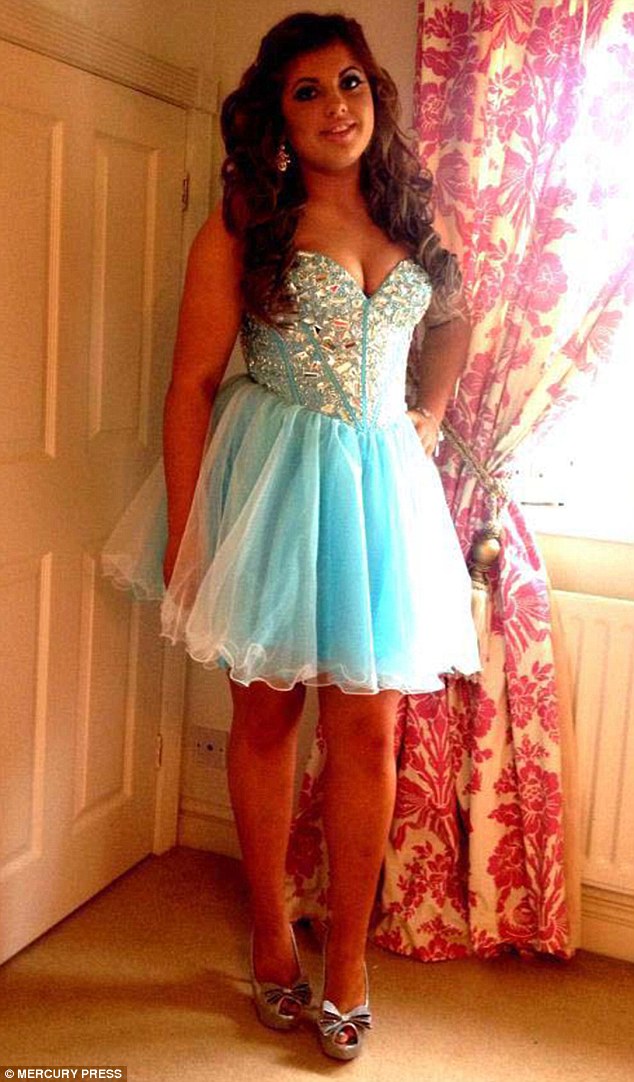 Before then, she lived off Starbucks, McDonald’s and takeaways for dinner – here, she is photographed in 2012 before she reached her heaviest in December 2014 and realised it was time for action

Until now, Abigail has always struggled with her weight and had been yoyo dieting for a number of years – she would even try fasting but ended up heavier than before

‘My boyfriend Dan and my family are amazed at how quickly I’ve done it. My parents actually paid for the personal training sessions initially because they were so worried about my size, but I pay myself now because I love it so much and want to keep it up.

‘This is my dream figure. I know being as muscly as I am isn’t everyone’s choice, but I wanted to have a solid six pack, partly because I’d never seen my body like that before.

‘When I could get into a size 10 it was a shock, then I went down to an eight and then a six.

‘I went to Cuba last month. I put up a selfie of myself in my new bikini on holiday on my birthday – by that point I just didn’t care what anyone said!’

‘This is my dream figure. I know being as muscly as I am isn’t everyone’s choice, but I wanted to have a solid six pack, partly because I’d never seen my body like that before’

Before signing up with personal trainer Ryan Evans, Abigail was working part-time in her parents’ boarding kennels, but otherwise did no physical activity

Abigail’s trainer Ryan Evans said that he started her programme by gradually introducing her to exercise, with two or three weight sessions a week, then, over time, increased them to five or six.

But he said it wasn’t just about exercise, it’s also ‘learning to eat properly’.

Speaking about her weight loss, which he said was over a six-month period, he said: ‘I’m extremely proud of Abigail. She stuck to the plan to a T, without a slip-up once. Her pictures show how consistency, hard work and determination pay off with the correct plan.

‘Of course people will think the images are fake – we live in a society of quick fixes and fad diets, and nobody likes to believe what can be achieved with hard work.

‘But anyone can achieve what Abigail has, if you want it enough and you give yourself enough time and don’t rush it.’