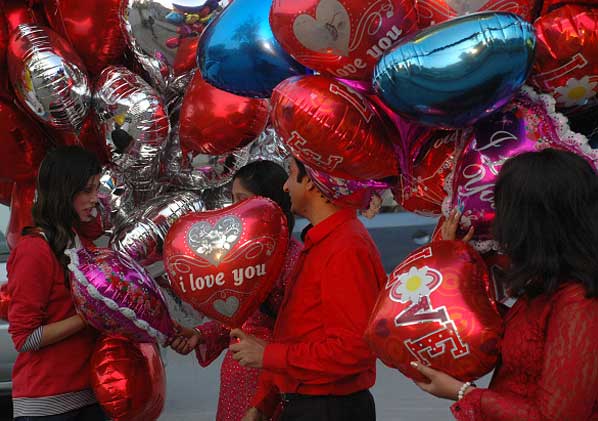 By Sidra Kausary (Pakdestiny.com) We are somewhat a confused nation and this moderation is making us more confused. Sub-continent was invaded by different people belonging to diverse ethnicities; thus, they all brought their cultures to this land as well. When President Mamnoon Hussain on Friday urged Pakistanis to avoid observing Valentine’s Day, saying the western tradition was not part of “our culture”.

“We should avoid Valentine Day as it has no connection with our culture,” Mamnoon Hussain said while addressing a gathering of students — mostly girls — on the death anniversary of freedom movement leader Sardar Abdur Rab Nishtar in Islamabad.

When somebody talks of banning the things which does not belong to our culture, I always have this question in my mind, which culture they are talking about? The culture of Sub-continent, in which we had rich folk music, traditions and joyful events like Basant, and now we term them as Hindu culture, or the culture of Islam, which is actually the Arab version and dubious to many. As Pakistan is a pluralistic society, it has vast land and so the culture also has diversity. But we love to drag Islam in everything and thus abhor music on the basis of religion.

Now when the world has become a global village, we can’t stop the amalgamation of the new culture from getting popular in ours.

Whatever gives some joy or happiness to people, we start propagating and tagging them as Hinduistic, Western, un-Islamic or something like that. Why is it so complicated to own this fact that with the passage of time, the Popular culture will surge into society and there is nothing to fear about.

President also said that a blind following of western traditions will lead to a degradation of “our values”, and has led to several problems including increase in attacks against women in a neighbouring country.

He also said that Pakistan could achieve progress by adopting the philosophies of its great leaders.

Hussain’s remarks against Valentine’s Day came a day after the local elected council in Peshawar and Kohat district banned its celebration.

There is no need to designate a special day where people give cards, chocolates and gifts to each other,” district council chairman Maulana Niaz Mohammad said. “Valentine’s Day has become a common and unnecessary part of our culture.”

So that sounds stupid as well, as maybe these So called Guardians of Islamic culture in Pakistan, attend many ‘Joyful Evenings’ where the Islamic culture is actually violated. We have become so hypocritical that until unless something is done secretly and privately, that is not considered as a vice , but if someone want’s to give a card, flowers, chocolates or show some love towards their spouse, it becomes an alarming moment for these Guardians of Islam and culture here.

The celebration on February 14 has often been criticised by locals as an “insult” to Islam. However, police said that the ban cannot be enforced as legally there is no bar on celebrating Valentine’s Day.

Most people in Pakistan celebrate Valentine’s day, usually observed by a limited number of people in major urban centres, at enclosed places. While in the past several such gatherings have been targeted and disrupted by activists of religious parties.

So there is just a simple message for those, that if you want to ban every entertainment for the people, then get ready to build more mental hospitals, because for a healthy life, Love and expression of love is necessary and those who think this is not a good way, then they should not observe this day, rather than attacking those who do.