(Pakdestiny.com) Pakistani’s Zahra Haider’s article on her ‘sex life’ before leaving Canada has caused an up-roar on the social media.

Many are chiding her for her ‘bold article’ and many are threatening her with life threats. But she is not here. She is in Canada – a free society  where he can enjoy freedom.

Although many called for removing her article from the social media thousands of people have ‘liked’ it.

What I Learned Having Sex as a Young Woman in Pakistan Women from poorer backgrounds could be victims of various forms of premarital punishment. Punishing women for premarital sex started with former President Zia-ul-Haq’s dictatorship or “Islamization,” which incorporated Zina (stoning to death), and Hudood (punishments such as whipping, amputation, honor killing) into Pakistani law. His government dismissed women’s rape accusations, instead labelling them as fornicators and sending them to jail. These draconian forms of punishment are slowly dying out, but still linger in the mentalities of fundamentalists, imams, and police officers. Shariah Law can also be blamed for many gender discriminatory policies in Muslim societies, such as the lack of support for freedom of speech, women’s rights, and, ultimately, human rights.

Achieving an orgasm was done in various ways, including but not limited to: having sex in a car with tinted windows and parked in the middle of nowhere; sneaking into my sexual partner’s home in the middle of the night; sneaking into my partner’s father’s office, which happened to have a bedroom (WTF?). All this was done while making sure that no one in the house was on the prowl to notify my single father who would’ve freaked out (sorry, daddy). Hotel rooms were especially helpful. Islamabad, where I grew up, only has two hotels, one being the Marriott, at approximately $150-$200 a night—which, for a teenager who had to bear the brunt of the currency conversion, was a ridiculously high sum. But alas, in Pakistan, even paying for a sexual sanctuary isn’t enough. The person who booked the room (the guy) would have to go up first, while the other waited about fifteen minutes to ensure no one from the concierge or security caught on to the fact we were about to have wild, rampant pre-marital sex. 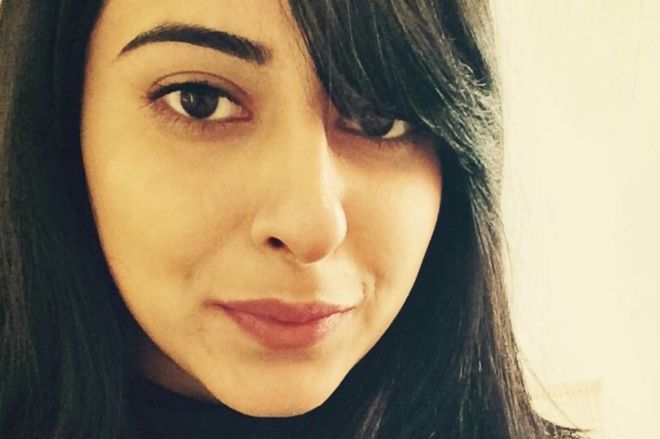 And then if you were caught, you had to deal with a shitstorm of rage. My aunt’s boyfriend was beaten to a pulp by my grandfather to “protect her honor.” And when my own parents found out about my own tryst, they threw a completely irrational and melodramatic fit about how I was destroying my future and forbade me from ever speaking to the guy again (after notifying his parents and my school).

Attempting to embrace my sexuality through my clothing was impossible too, because I had to wear baggy, unflattering t-shirts that diverted attention away from the shape of my breasts.

After moving to Toronto just before my 19th birthday, still holding onto the reserved nature that kept me from showing any cleavage whatsoever, I reverted to socializing with my Pakistani peers from back home due to the intensity of my homesickness. But I eventually came to realize that a change in setting has done little to remove the biases of lots (but not all) of the Pakistanis living in Toronto. Hooking up with a Pakistani guy who had a Pakistani roommate made me extremely uncomfortable, due to the conditioned fear of judgement. Eventually, I was introduced to a completely different environment, surrounded by different people with different cultures, values, and mindsets, which made me realize there is no reason I should be ashamed of being who I want to be, but that’s what happens when you’ve been living in a highly judgmental bubble of society.

I’ve never been religious or, I’d like to think, judgmental. But moving to Toronto and walking by Yonge and Dundas on my very first night here was definitely sexual culture shock. Seeing Condom Shack, The Stag Shop, Seduction, and other sex shops so openly in public made me feel a little overwhelmed—not necessarily in a bad way. The subtle racism and exoticization of colored women further overwhelmed me and even slightly grossed me out, primarily because I’m not a zoo animal (even if being told my strange “hybrid” accent was beyond attractive and being seen as an anomaly by some did make hookup culture here all the more exciting). It also made me realize I would never sleep with someone who was ignorant enough to believe all Pakistani women must be religious (yes, this happens) and thus assuming I wouldn’t sleep with them.

Yet as mentioned, I was deeply repressed, I had no idea how to masturbate (seriously) and in my experience, the majority of the men I had been with were Pakistani and not one of them enjoyed going down on me (in fact, a lot became defensive when the topic came up). I personally think it has to do with the misogynistic theme of our society, as well as the fact sons are generally admired more than daughters in South Asian culture which creates a sense of entitlement: they should not be ‘lower’ than women in any way, physically or emotionally. Thus, after I met and started hooking up with men who genuinely enjoyed going down on me, I came to the realization that being with someone who doesn’t partake in oral sex because of unrequited selfish and egotistical reasons, just isn’t worth it. After becoming more comfortable with sexual expression and freedom, I met a couple guys on Tinder—some of whom I had mind-blowing sexual chemistry with, and some who called me too reserved and too “prude-ish” for their liking—as if I’m going to adjust the levels of my sexual comfort with yours, dude.

Most Pakistanis will indulge in premarital sex, and because sex-ed is something that ceases to exist, those who do still end up doing absurd things like overdosing on emergency contraceptives due to being unaware of the allowed dosage and not reading the minuscule, medicinal instructions written in tiny Urdu print. Or even worse, women are forced to have induced, clandestine abortions, often resorting to painful and unsafe methods because abortions are haram (sinful) in Islam and only permitted when the woman’s life is in danger. This basically leaves Pakistanis with no choice about whether they’re pro-life or pro-choice: we are pro-life, for life apparently.

Perhaps we should take into serious consideration that Pakistanis are potentially the horniest people in the world and start treating sex and sexuality for what it is, instead of shunning it and labelling it as “taboo.” Many Pakistani millennials don’t see it that way, and I’m certain they are going to keep having sex in random, obsolete places without viable access to safe methods of contraception while they continue to repress their sexualities. Learning and accepting that people’s opinions of you no longer matter is possibly the most liberating thing in the world. Being indifferent to small-minded judgements and realizing my world does not revolve around theirs, is what helped me combat the weird, toxic judgmental voice inside my head that constantly called me a “gashti” (Urdu word for slut).

All I wanted to be—and what I now am—is an effortlessly confident woman in her 20s who embraces her sexuality and no longer gives a fuck about what people from back home say or think about her. I’ve embraced the transition for those particular reasons but also, being able to save $200 on a hotel room for a quickie and have sex on a bed without the fear of your parent walking in is definitely a major relief.