(Pak Destiny) Pakistani-origin British Boxer Amir Khan is embroiled yet another controversy as his ‘sex tape’ was today leaked online.

The  Sun newspaper reported that Amir shows him in just a T-shirt and boxer ‘shorts performing a sex act on himself’ in conversation with a female model on the video call service Skype.  A long-rumoured sex tape featuring boxer Amir Khan has finally emerged online today. It is said that video was made just weeks after Amir’s wedding to Faryal Makhdoom in 2013.  American Faryal, 25, was said to be “absolutely disgusted” by the video — which has been published on a major US porn website. The woman in the footage is believed to have been from Arizona, USA, and first had a fling with Amir in 2010. 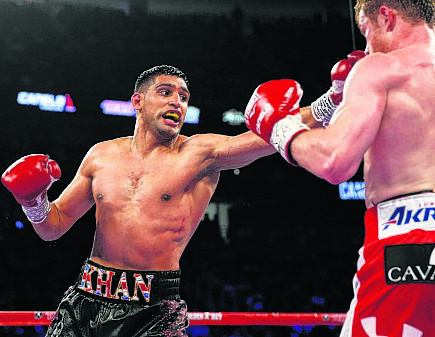 Beauty blogger Faryal’s feud with Amir’s family was exposed after she posted a long rant on social media accusing them of bullying her.

She claimed Amir’s sister had thrown a remote control at her and cropped her out of family pictures.

Amir’s parents then sparked a war of words by slamming her accusations.