Britain’s towns and cities descended into chaos as binge-drinkers hit the streets on what has become known as black eye Friday.

Police cells in one city were full by midnight as officers dealt with incidents of violence, drunkenness and disorder on their busiest night of the year.

Streets were filled with boozed-up revellers and many resorted to violence and vomiting in the street.

Photographs from around the country captured the mindlessness – with one man pictured running away from police officers in a street before he was arrested. 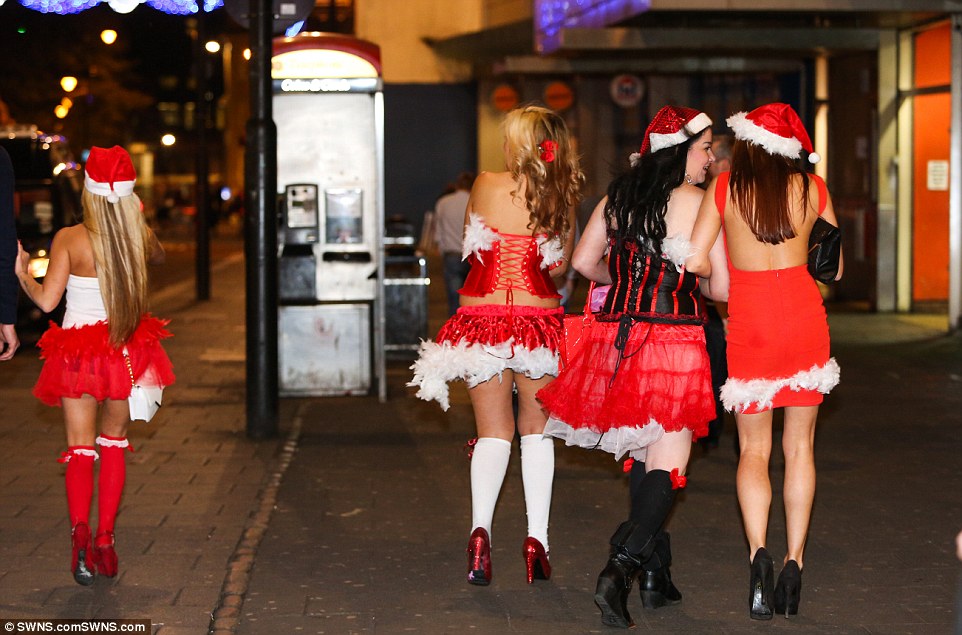 Santa baby: Police issued warnings all over the country for the evening of frivolities, which marks the beginning of the Christmas holiday for millions, but is also known for heavy drinking and the crime that comes with it on Britain’s streets 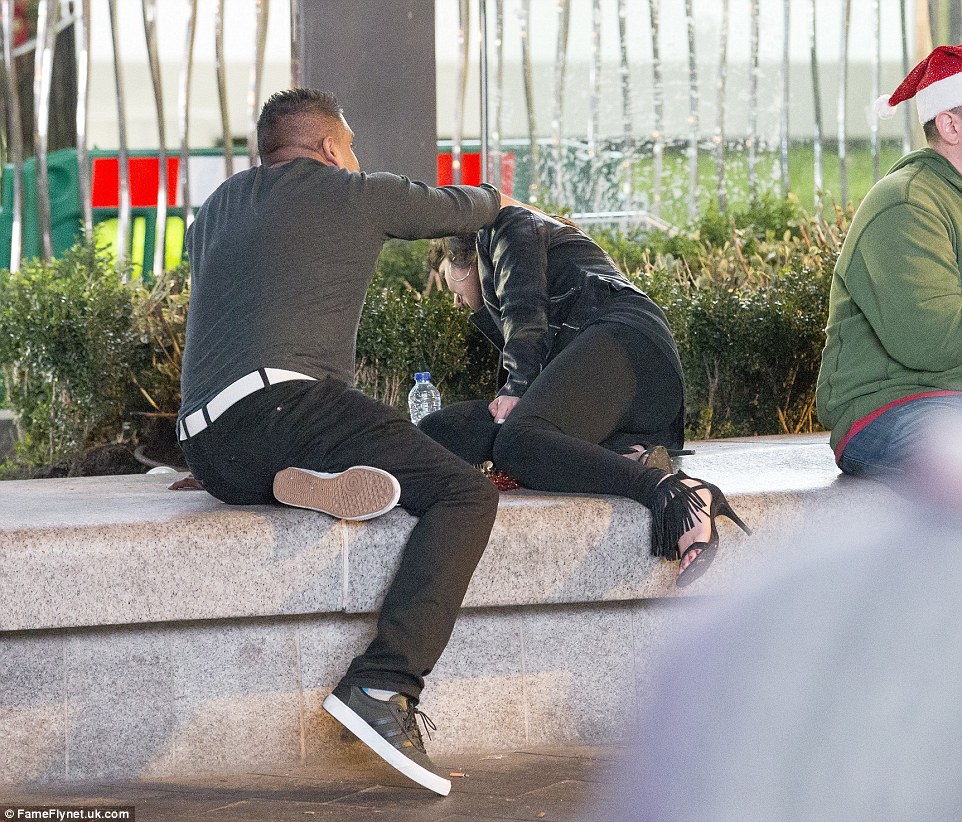 End of the night: A man holds a woman’s hair back as she leans over a wall in central London following a night out 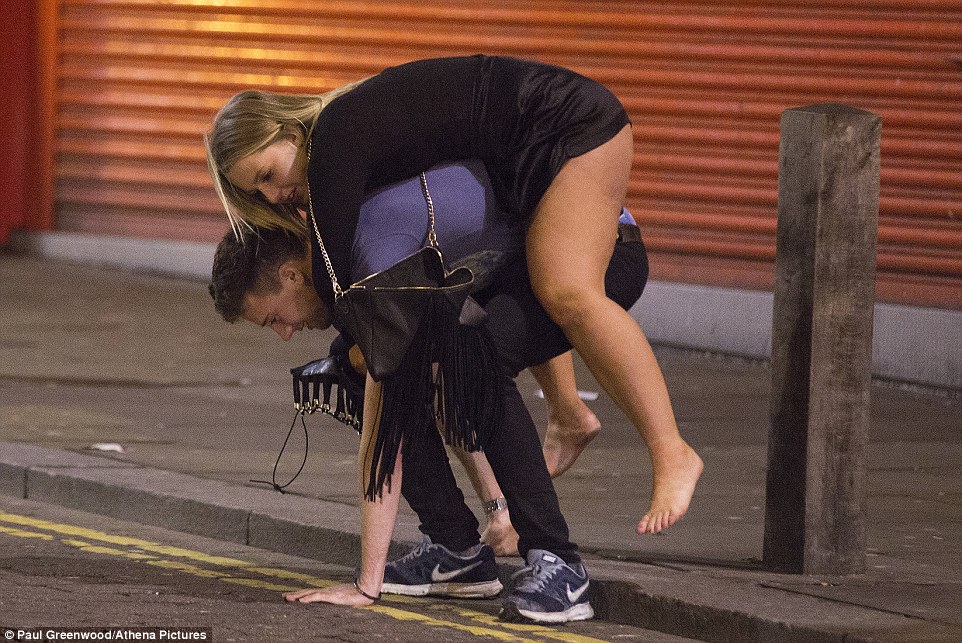 Keeping his balance: A man attempts to pick up his female companion so that he can give her a piggyback in Liverpool 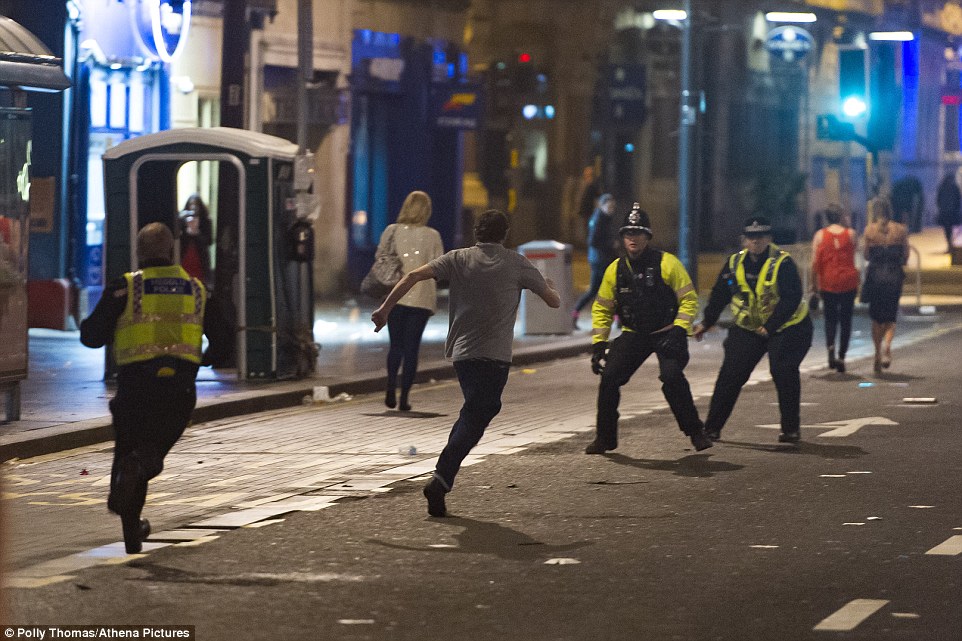 Getaway: A man runs away from police before being caught and put in handcuffs in Cardiff in the early hours of this morning 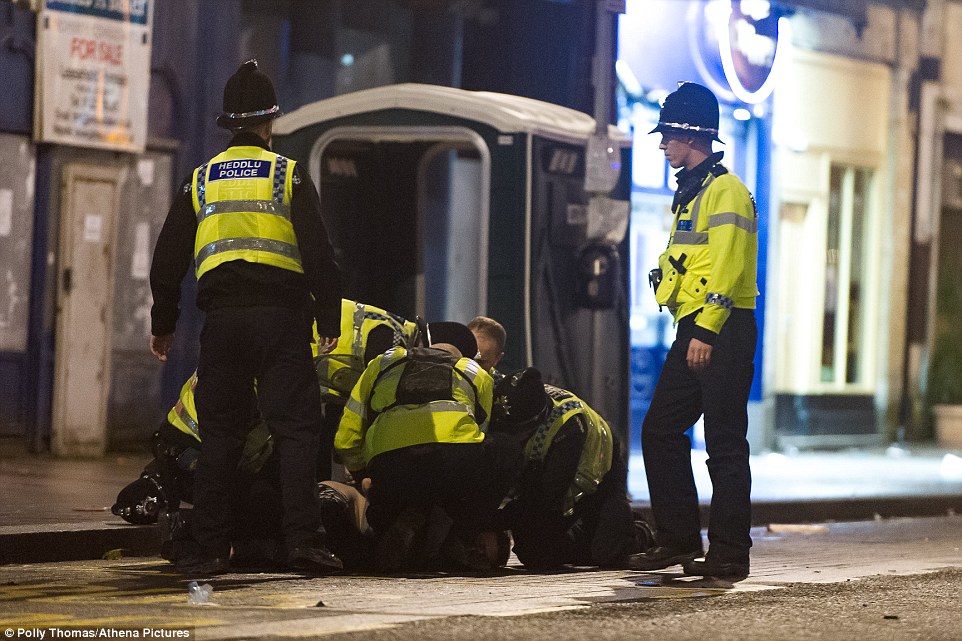 Held: A man is bundled to the ground by police officers in a street in Cardiff despite trying to run away and evade getting caught 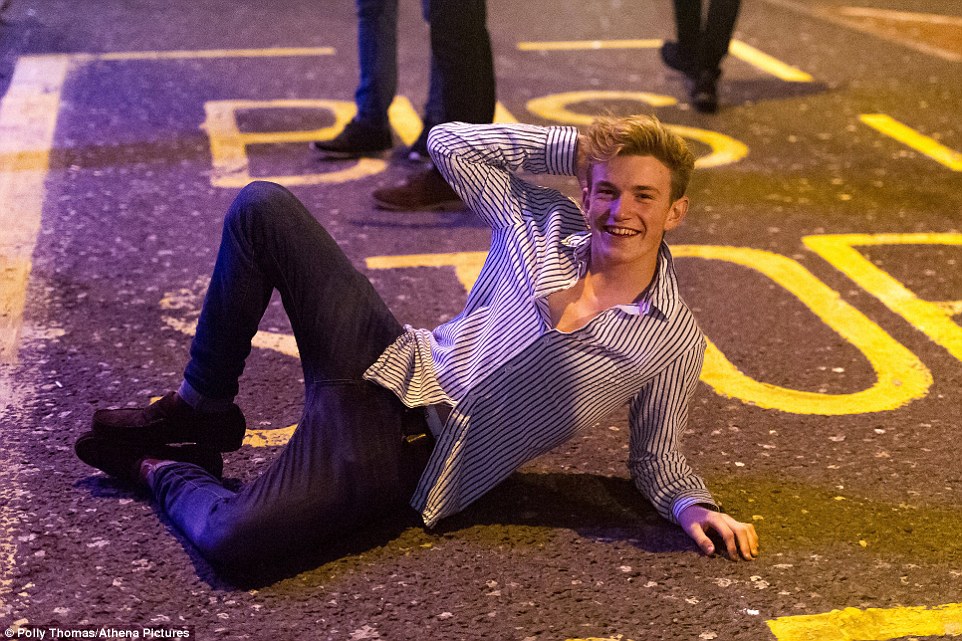 Posed: A man appears to enjoy having his photograph taken as he lay on the ground in a bus stop in Cardiff

One man was pictured lying on the wet ground in a bus stop, while a group of women were photographed eating a takeaway in a shop doorway.

The last Friday before Christmas is traditionally a rowdy night due to the huge number of office parties taking place, the end of the academic term and workers being given Christmas bonuses.

In Plymouth officers dealt with odd 999 – including someone complaining they had been thrown out of a club and a man saying a prostitute was walking away with his cash.

According to the Plymouth Herald, at 12.30am the city’s police custody centres were full and there were three vans filled with arrested people waiting to be found someone to be housed.

Medics in Wales were forced to open a makeshift Accident and Emergency ward in the streets of Cardiff last night to deal with the fall out of Black Eye Friday. 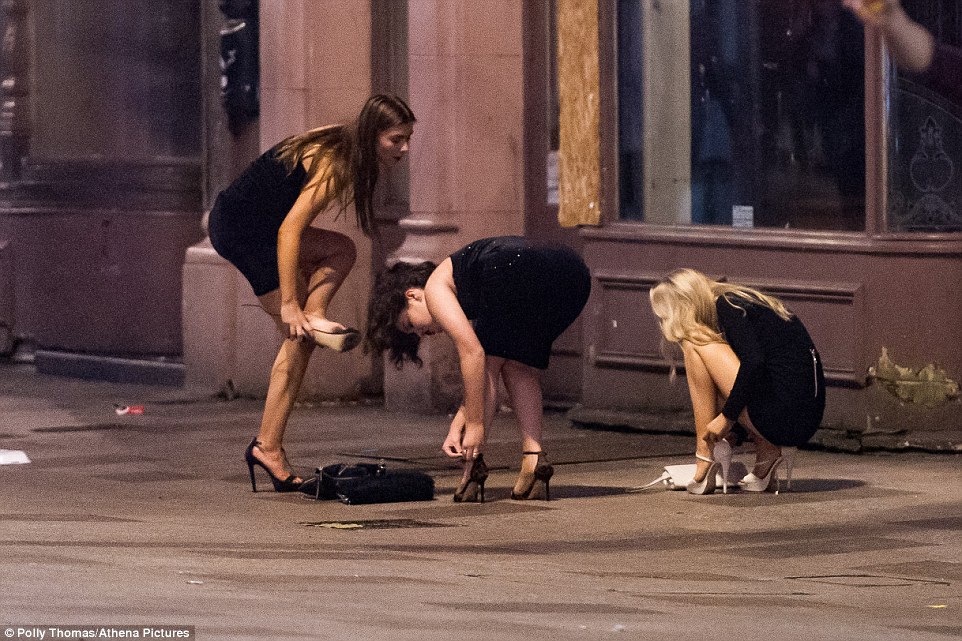 End of the night: Three women remove their high heeled shoes following a night out on St Mary Street in Cardiff 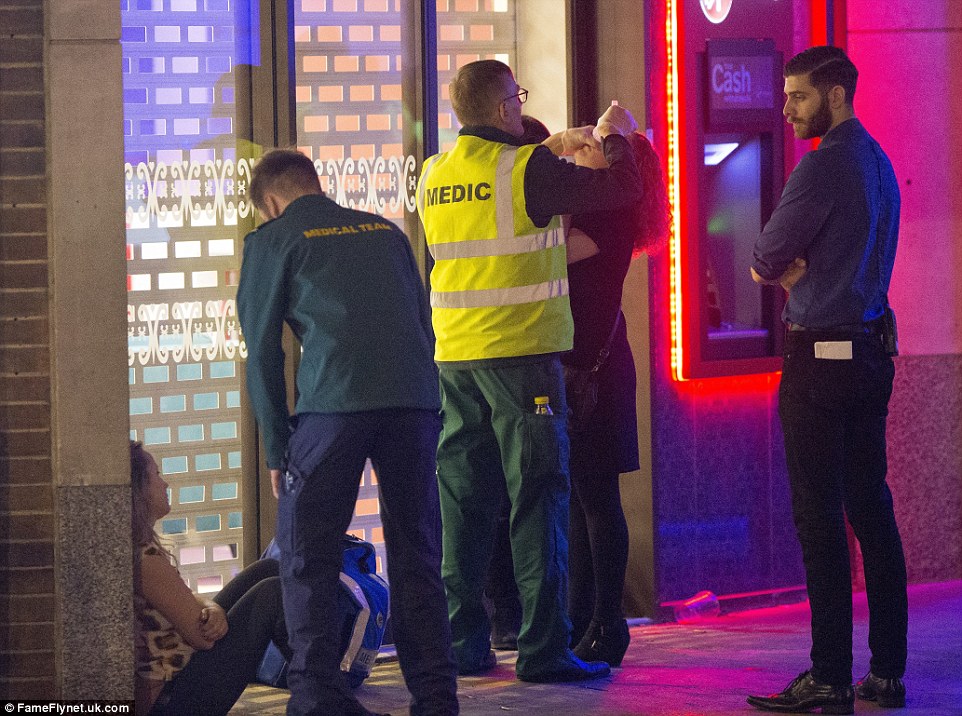 Medics: A and E departments are typically flooded with Britons on the last Friday before Christmas. Medics are pictured here helping two women in central 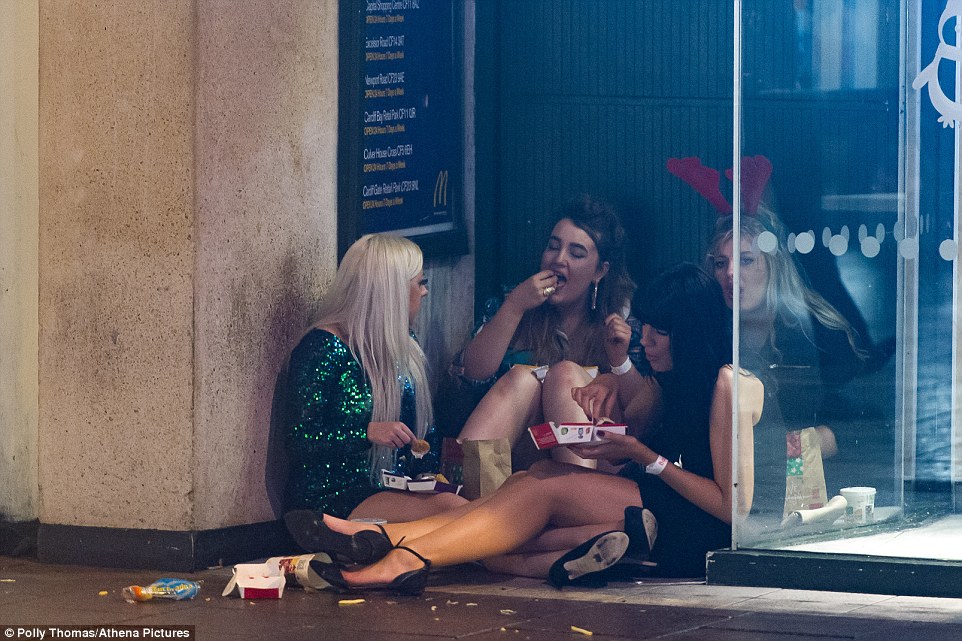 Takeaway: A group of women sit in a doorway eating McDonalds in the early hours of this morning following Britain’s busiest night of the year 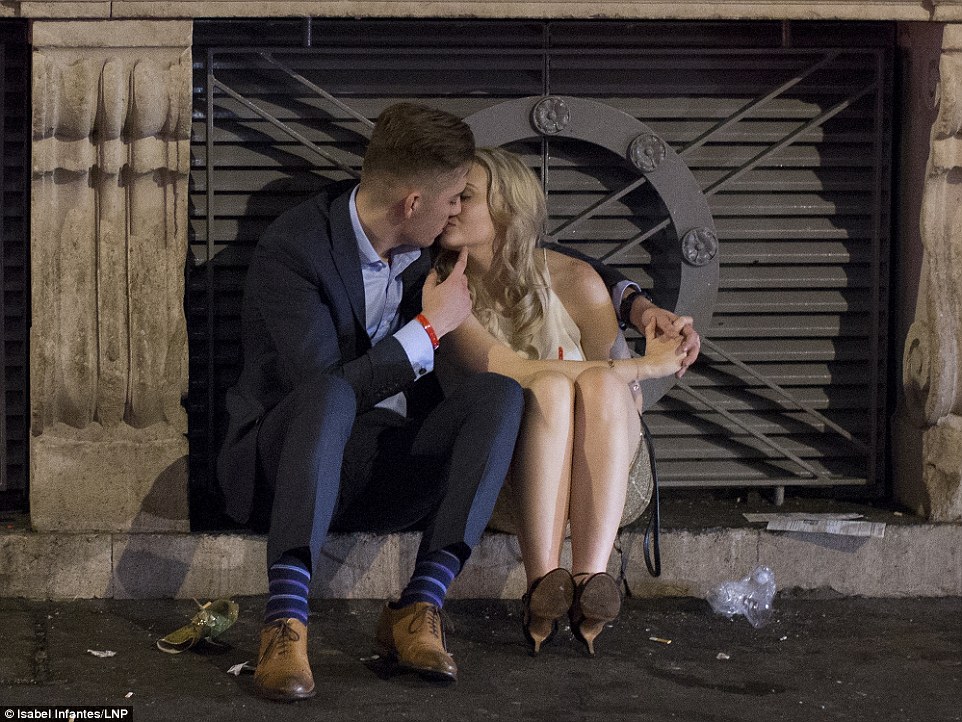 Smooch: A couple share a kiss as they sit on the curb on a street in central London as thousands of revellers hit the streets

Ambulance bosses set up the triage unit in the streets of the Welsh capital in order to treat dozens of walking wounded.

Pictures from Cardiff show one man being tackled by a group of police officers, couples snogging in the streets and several revellers being sick.

Other snaps show women dressed as sexy Santas dolled up for their parties and men clinging onto their end-of-night kebabs.

The antics come despite police warnings for revellers to take extra care during the festive season.

Supt Jane Banham of North Wales Police said: ‘We know from experience that at this time of year some people will come to harm due to alcohol excess and it is the emergency services and local councils who are left picking up the pieces. 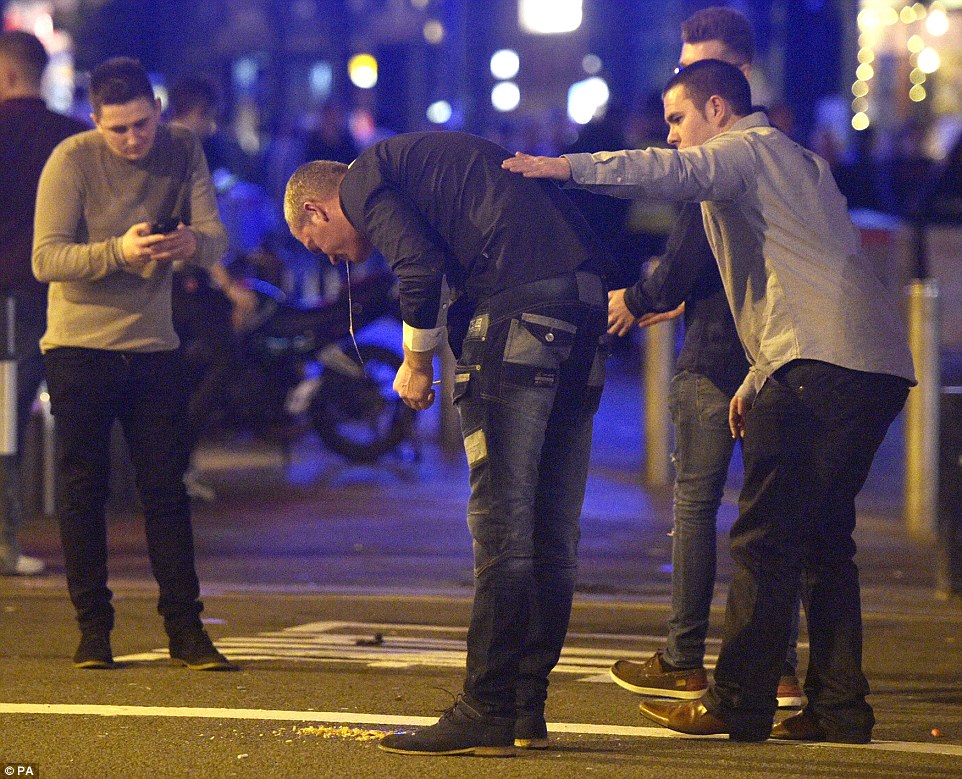 Unwell: A man is comforted by his friends as he is sick in St Mary Street in Cardiff during the biggest night out of the year 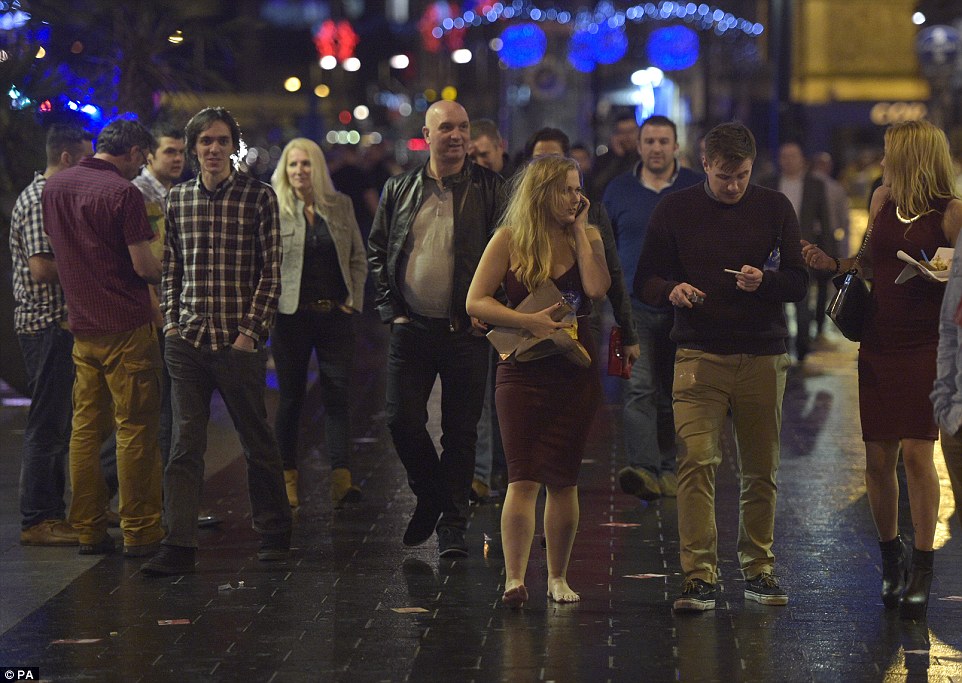 Busy: Streets were packed with revellers as people across the country celebrated the start of Christmas. In Cardiff a woman is pictured carrying her shoes in her hand as she walks along the wet floor 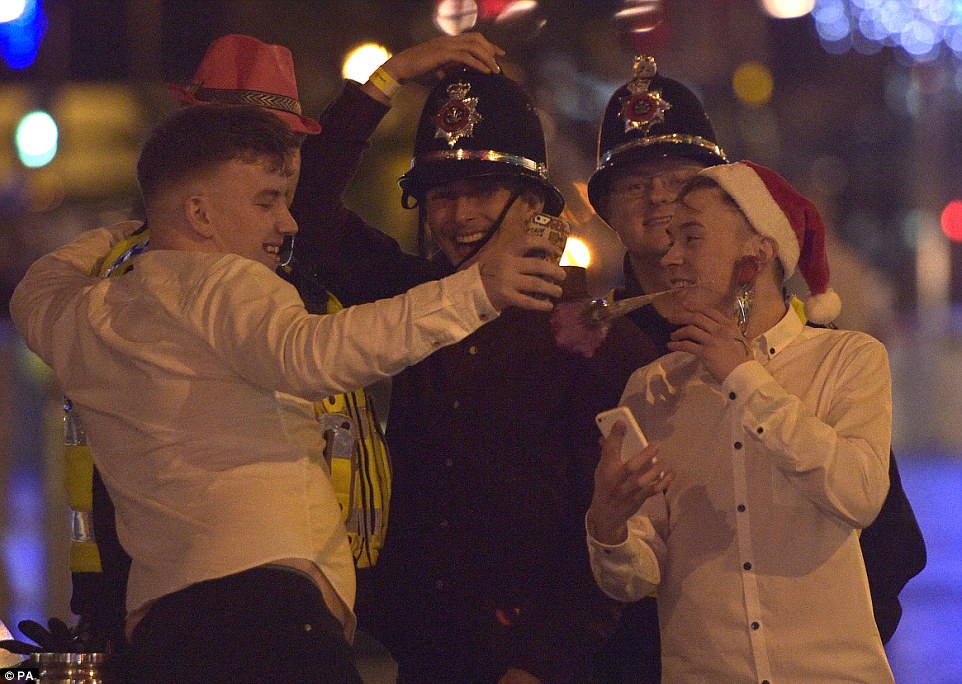 Say cheese:  A group of men pose in police and Santa hats as they take a selfie with police officers on St Mary Street in Cardiff

‘We make a significant contribution to keeping our town centres safe so people can enjoy a good night out.

‘But we must get the message across that people need to take greater responsibility for themselves and their friends to reduce the likelihood of them being injured, becoming a victim of crime, or being involved in violence through excessive drinking.’

Last night police issued warnings all over the country for the evening of frivolities, which marks the beginning of the Christmas holiday for millions, but is also known for heavy drinking and the crime that comes with it on Britain’s streets.

A and E departments are typically flooded with boozed-up Britons who start drinking early at 5pm on the night that thousands of firms throw farewell Christmas parties, and alcohol sales soar by 142 per cent. 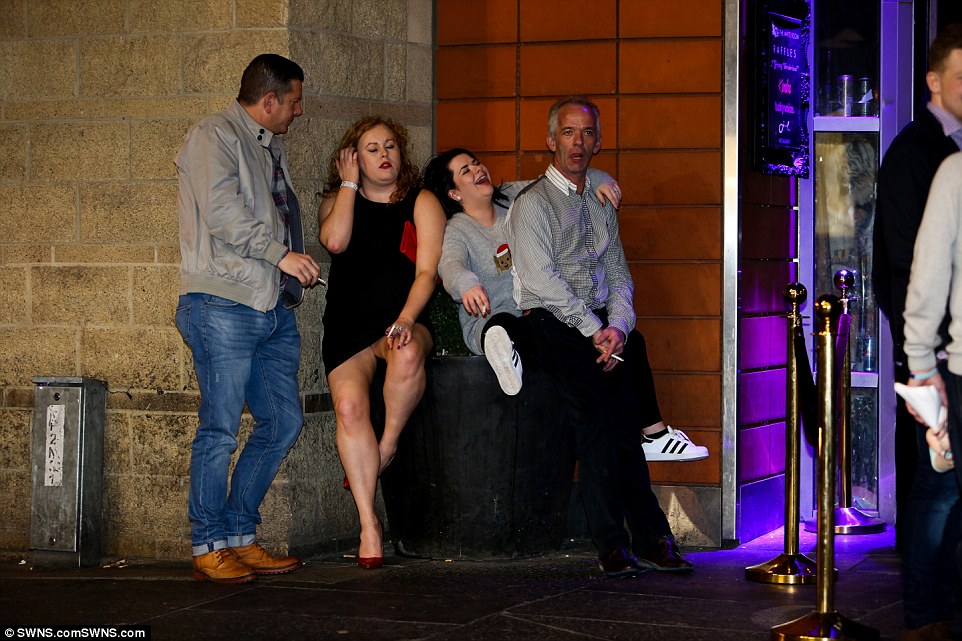 Club casualties: A and E departments are typically flooded with boozed-up Britons who start drinking early at 5pm on the night that thousands of firms throw farewell Christmas parties, and alcohol sales soar by 142 per cent 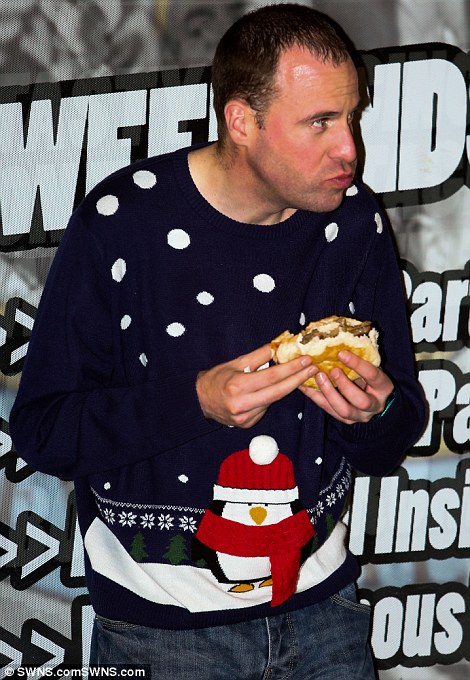 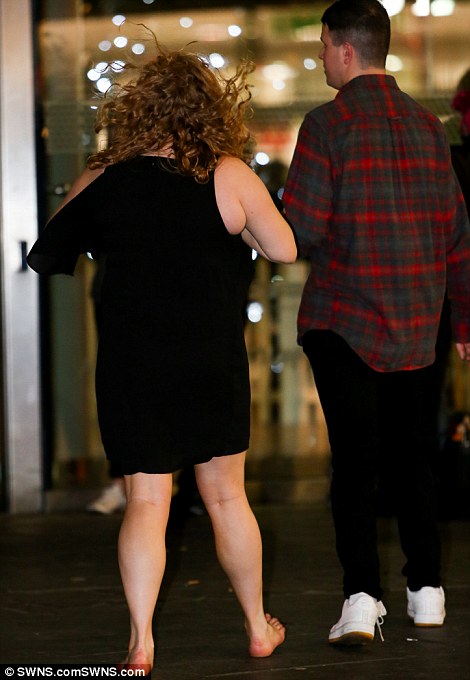 Early night: This reveller in Newcastle enjoys an early burger on a night where authorities struggle to deal with drunk people, many of whom start drinking at lunchtime 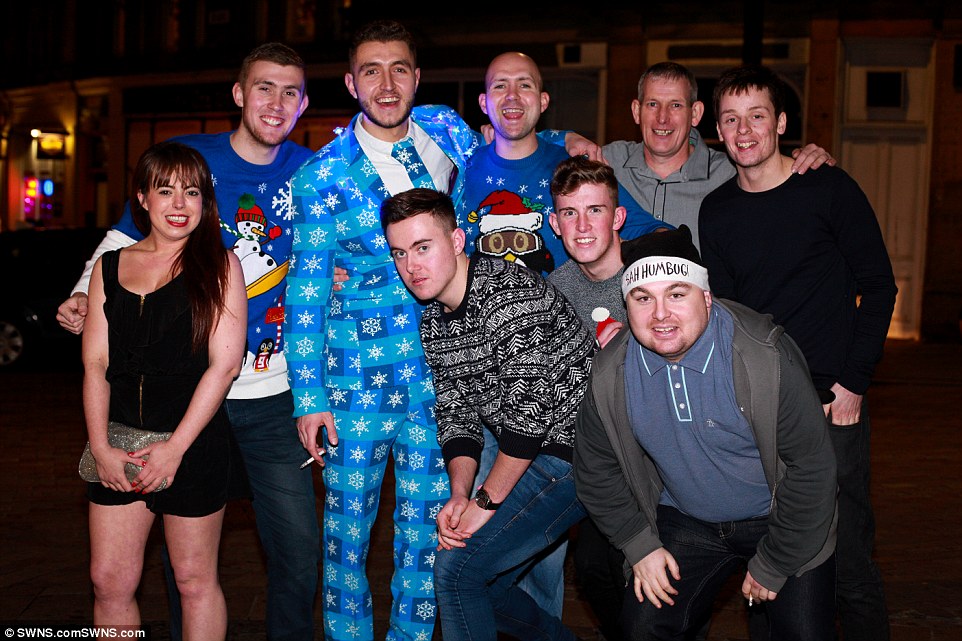 Lads night out: This group dresses for the occasion to celebrate black eye Friday, with Christmas jumpers and even a bespoke snowflake suit

Fancy dress: Two revellers hit the streets of London in costumes as the cities bars and clubs were packed with people

Police forces across the country issued warnings for ‘Black Eye Friday’, which gets its name from the the violence on the streets associated with what is one of the busiest nights of the year for pubs and clubs.

Officers were out in force last night and expected an increase in crimes including drink driving, assaults, sexual assaults and domestic abuse.

Ambulance services were on high alert after reporting huge rises in the number of call-outs in previous years, with thousands ending up in A&E departments.

Last year the London Ambulance Service attended 32 alcohol-related incidents in just one hour on Black Eye Friday. Between Friday and Sunday December 19-21, the service was called to a total of 731, and 5,059 for the month as a whole in 2014. 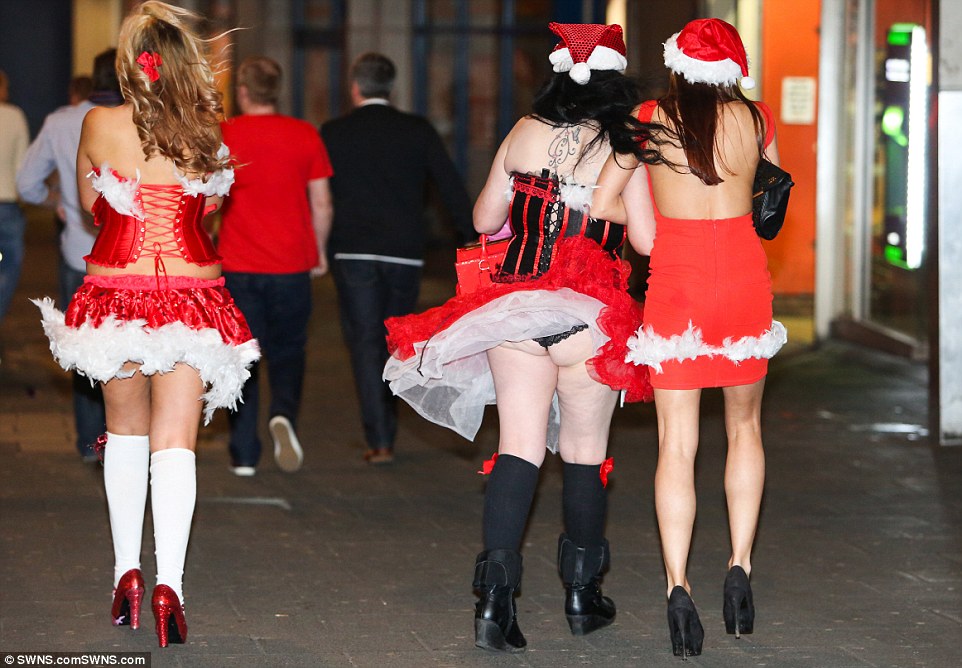 Unwrapped: It’s a night known for frivolities, when people often get carried away with festive cheer after too many drinks 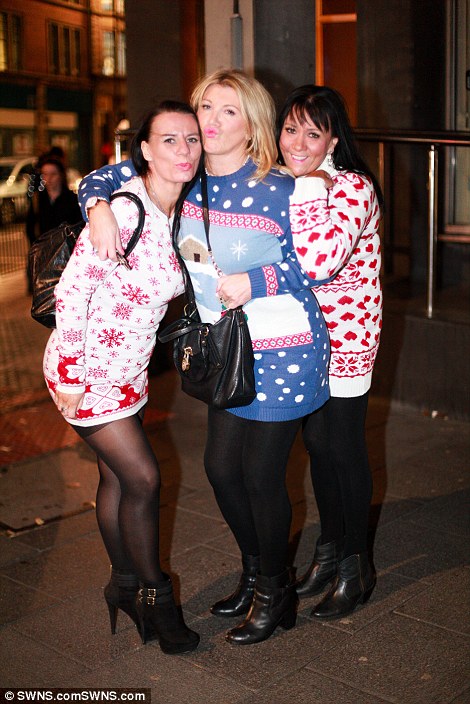 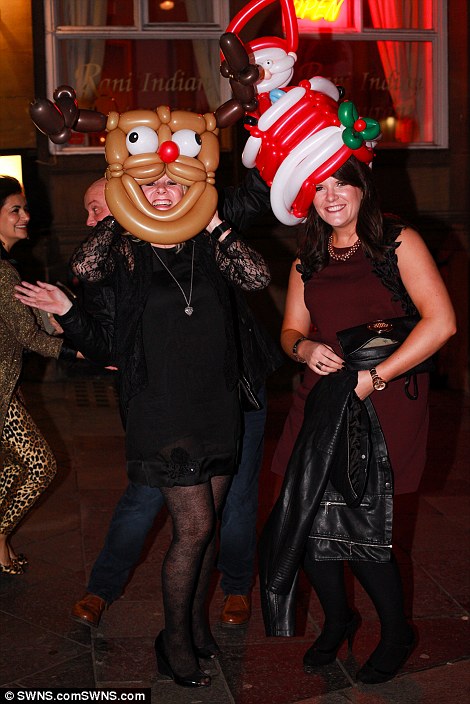 Duck face: These girls pose up in their Christmas jumpers on a night when alcohol sale soar by around 142 per cent every year 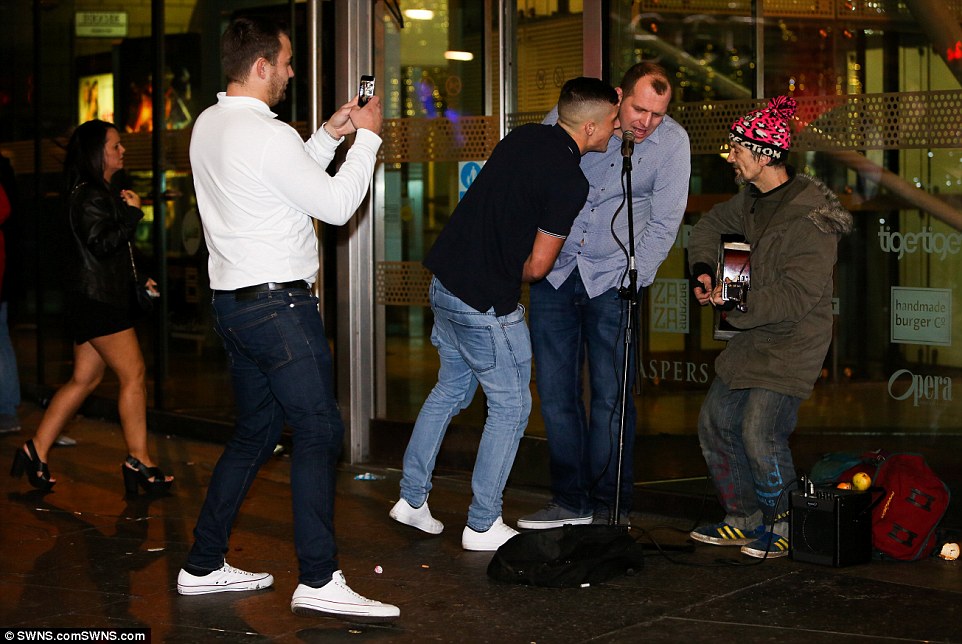 Singing to the tune: These part-goers sing some karaoke in the street outside the tiger tiger nightclub in Newcastle where a busker entertains the crowds on one of the busiest nights of the year

Leading criminal lawyer Sean Joyce said: ‘[It] is one of the busiest days of the year for our solicitors and we experience a huge jump in enquiries as Christmas party season reaches its peak.

‘In the vast majority of cases, this phenomenon is directly attributable to over indulgence, where increased alcohol consumption can cloud a person’s judgement and cause them to act out of character.

‘Many of those we are asked to represent are first-time offenders whose behaviour gets out of hand and results in a night in the cells, or even a criminal record.

‘Even minor misdemeanours can result in life-changing consequences. You may be unable to apply for certain jobs or may find yourself barred from your local high street.

‘Few people go out looking to get themselves arrested, but revellers should take care not to get carried away and keep themselves safe and out of trouble.’

It comes as questions were raised about the NHS’s decision to have its Dry January campaign run by a PR firm receiving millions from the drinks industry.

Officials are paying Freuds thousands of pounds to handle the marketing for the drive which urges Britons to give up alcohol next month.

But the same firm also oversees the advertising for Diageo, the drinks giant behind brands including Guinness, Baileys and Smirnoff vodka. 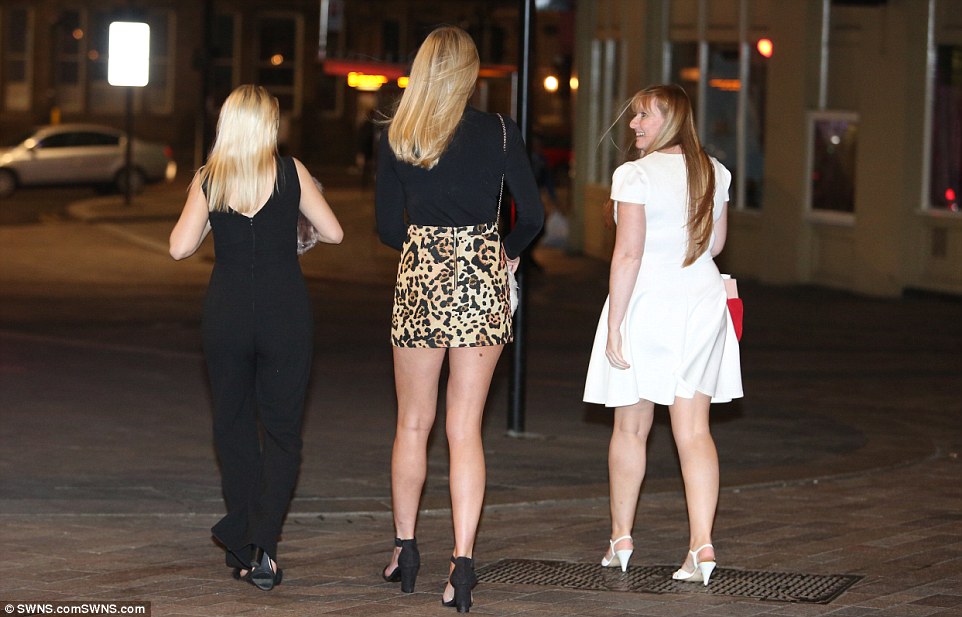 Big night out: These women hit the streets on the busiest night of December, when Britons make an estimated 165 million trips to bars, pubs and clubs throughout the month, spending £2.3billion in drinking establishments

Controversially, Freuds also runs the PR for the NHS’s anti-obesity drive Change4Life – whilst also doing the advertising for Mars, KFC and Pepsi.

Public Health England, the Government agency responsible, would not disclose how much money it had paid the firm for either campaign.

But financial accounts show it is about £90,000 a month, just under £2million a year.

The campaign, which launches today, encourages adults to abstain from alcohol throughout January to give their livers a rest after Christmas. It was initially set up by Alcohol Concern.

They will be reminded of the numerous health benefits of giving up alcohol which include losing weight, having clearer skin and being less tired.

And last month a major study by the Royal Free hospital in London showed that stopping drinking for a month was as good as a drug – and reduced liver damage and blood pressure.

But experts questioned why Public Health England were paying Freuds to run the campaign rather than doing it themselves.

There are 5,000 full-time staff members employed by the quango – an arms-length body of the Department of Health – including 50 in press and marketing.