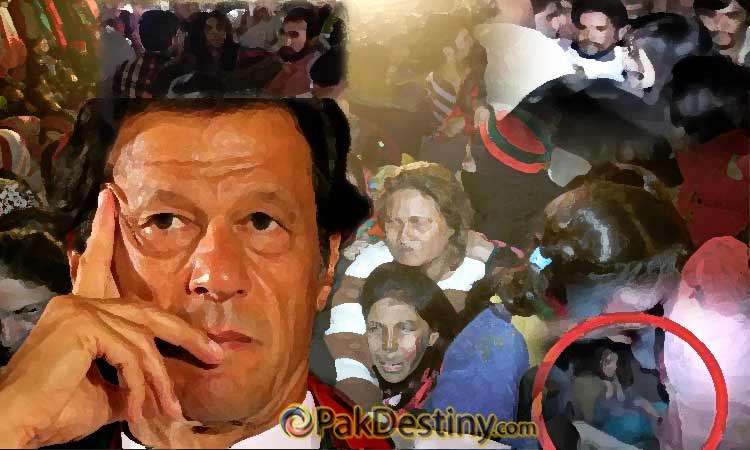 (Pakdestiny.com) Everyone including Imran Khan is indulged in blame game but yet no action has been taken against those ‘beasts’ involved in molestation of women at PTI Lahore rally the other day.

The Pakistan Tehreek-i-Insaf (PTI) has postponed its May 8 Faisalabad public meeting citing concern for the safety of female attendees after women supporters were allegedly harassed at the party’s recent public gatherings. Party insiders, however, claim the real reason is a rift between party workers organising the event.

PTI Chairman Imran Khan posted a statement to Facebook saying the public meeting had been postponed in light of the harassment of female attendees of the party’s gatherings in Islamabad and Lahore over the past month.
“I don’t trust the Punjab police” after women were harassed at PTI gatherings, he said, adding that plans to attack the women were a conspiracy to restrict their participation in politics. Khan implied his party is afraid the same will happen in Faisalabad.

But isn’t it a big shame for the PTI and Imran Khan that they have not yet built a pressure on the Punjab government to arrest the ‘beasts’. Will Imran Khan announce holding a protest rally to press the PML-N Punjab government to arrest the beasts or he only concerned with PM Sharif resignation over Panama Leaks?.
The beasts acts are equally shameful for society and political parties.
Pak Destiny