Islamabad, July 2 (http://www.pakdestiny.com) The Pakistani media has shown keen interest in the divorce issue of Hollywood couple Tome Cruise and Katie Homes and given an extensive coverage to it.
Since the news of their divorce broke almost all major publications including Dawn, The News, Daily Times and even the hardliner Nawa-i-Waqt group gave a prominent place to the news. Even some of the dailies had the follow-up story, coming out of Meera-Reema syndrome.
Cruise’s objectionable photo-shoot for magazine is said to be reason behind the break up.
Over its seven-year duration there was almost no sign of the cracks that would finally lead to lawyers’ offices.
Actress Katie, 33, cited “irreconcilable differences” in divorce papers lodged in New York signalling the end of the pair’s five-year marriage.
But it wasn’t always so, for the girl who admits to having posters of the Top Gun star on her wall as a teenager.
The pair went public with their relationship in May 2005 by attending an Italian awards ceremony together.
Proud Tom snogged his girlfriend openly on the red carpet and the hot new couple were swiftly dubbed TomKat.
Their relationship had begun when Tom summoned Katie for a meeting in Los Angeles in early April.
He then plucked up the courage to invite Katie for a sushi date on his private jet 15,000 feet above Southern California.
That was followed by a ride on his motorcycle, a romantic beach trip and more secret dates.
A month after their first date 49-year-old Tom famously declared his love for her on The Oprah Winfrey Show, jumping up and down on her couch.
A whirlwind engagement followed in June when Tom proposed to Katie on top of the Eiffel Tower in Paris.
By the October the couple announced they were expecting a child and their daughter Suri was born in April 2006.
On November 18 2006 Tom and Katie tied the knot in an elaborate Scientology wedding at Odescalchi Castle in Italy.
Due to the Scientology ceremony not being recognised in Italy, the couple also married in Los Angeles a few days before, with witnesses including Will Smith and Kelly Preston.
But yesterday the relationship came to a crumbling halt as the ex-Dawson’s Creek star called time on their five and a half-year marriage.
Relive their romance with our picture overview of their life together.(http://www.pakdestiny.com) 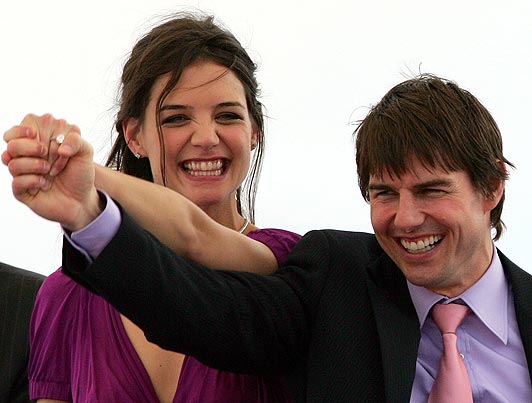