A charming and larger than life Vinod Khana today was cremated. What an iconic actor he was… he will be long remembered for his superb performance in a number of Hindi flicks. Bollywood actor Akshay Khanna during the cremation of his father veteran actor Vinod Khanna in Mumbai on Thursday. (PTI)

The veteran Bollywood actor, politician and former union minister – Vinod Khanna – passed away in Mumbai on Thursday morning following prolonged illness. He was 70. His funeral took place at a crematorium in Worli, Mumbai, in the evening which was attended by a number of his contemporaries, including Amitabh Bachchan, Rishi Kapoor, Ranjit and many others.

Hindustan Times writes Khanna was hospitalised over a month ago for cancer but the family then remained tight-lipped about his condition. In a brief statement, the hospital said Khanna breathed his last at 11.20 am due to advanced bladder carcinoma.

Khanna is survived by his former wife Geetanjali and their sons Akshaye and Rahul, who are now actors, and his present wife Kavita and son Sakshi and daughter Shraddha. 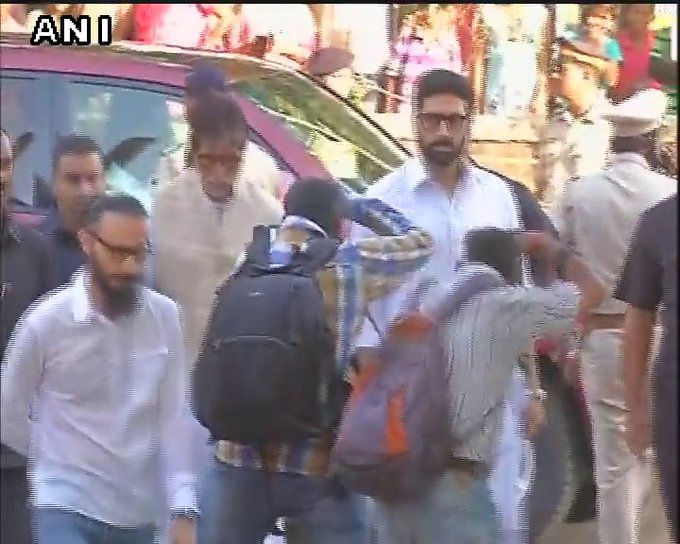 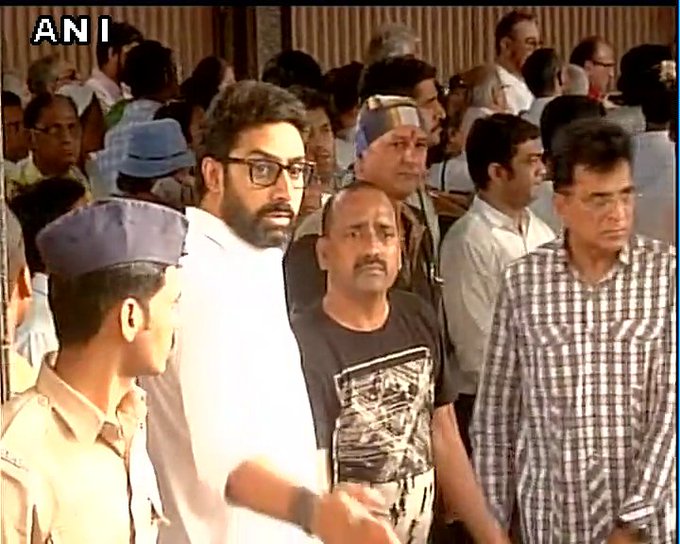 Actor Rahul Khanna during the cremation of his father Vinod Khanna in Mumbai on Thursday. (PTI)

News of his death triggered an outpouring of grief from Bollywood actors and millions of fans on social media. Actor Rishi Kapoor, who was Khanna’s co-star in the 1977’s Amar Akbar Anthony, tweeted a poster of the film. “We will miss you Amar. RIP,” Kapoor said, referring to Khanna’s screen name in the film.

Amitabh Bachchan at the funeral of Vinod Khanna in Mumbai on Thursday. (AP)

Amitabh Bachchan reportedly rushed to Vinod Khanna’s family’s side after hearing the news of his death. According to reports, he was giving an interview for his upcoming film Sarkar 3.

Ace director Karan Johar took to Twitter to pay tribute to the legendary actor. He wrote:

His screen presence is unparalleled even today…his super star swag is what we grew up on….RIP #VinodKhanna …thoughts and prayers….

In his condolence message, filmmaker Subhash Ghai called Khanna a “real handsome man” both on and off screen. “He celebrated his life with love and dignity and compassion for others and in service to his nation as MP,” Ghai said. 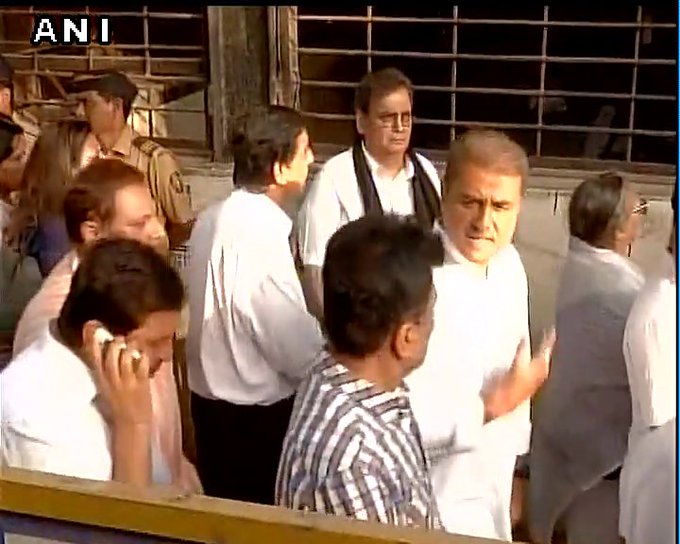 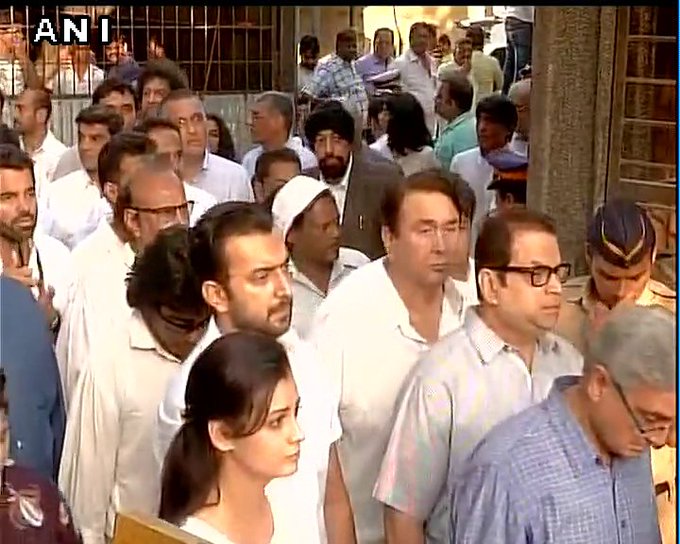 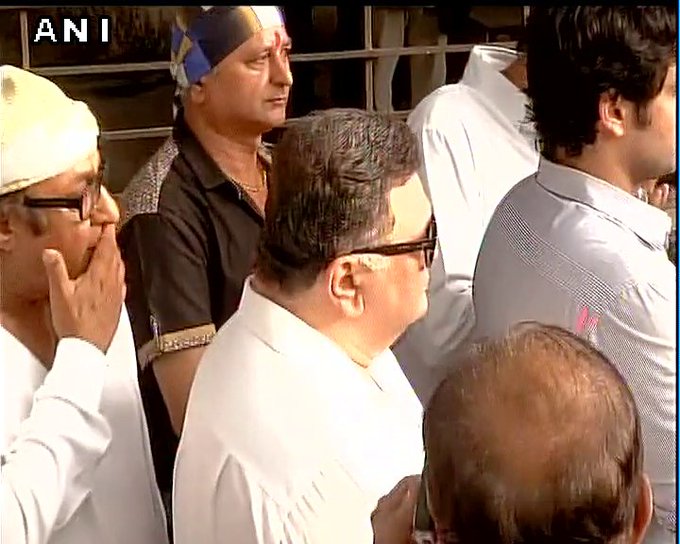 Prime Minister Narendra Modi and President Pranab Mukherjee condoled the demise of Khanna. “Will always remember Vinod Khanna as a popular actor, dedicated leader and a wonderful human. Pained by his demise. My condolences,” Modi tweeted.

Friends and relatives carry Vinod Khanna’s body during his funeral in Mumbai on Thursday. (AP)

President Mukherjee also tweeted: “Heartfelt condolences on the passing away of Vinod Khanna, a highly talented and acclaimed actor and MP.”

A number of political leaders expressed their condolence on Khanna’s death. Congress President Sonia Gandhi said she remembered as a “gifted actor”. “Vinodji had a rare and profound influence over the masses with his simple and charismatic character,” she said, adding he dominated the silver screen with his outstanding persona. Gandhi expressed solidarity with Khanna’s family and prayed for the departed soul.

“Saddened to know about the demise of one of the greatest legends of Indian cinema,” Maharashtra Chief Minister Devendra Fadnavis said. “We have lost an eminent personality who played a variety of roles in his film career and later in his social-political life. His contribution, both in films and as a minister, will always be remembered,” Fadnavis added.

Information and Broadcasting Minister M. Venkaiah Naidu on Thursday condoled the death of veteran Bollywood actor-turned-politician Vinod Khanna. In his message, Naidu recalled Vinod Khanna’s contributions to cinema and the Bharatiya Janata Party (BJP). “I am deeply saddened by the passing away of a great film personality and Member of Parliament Vinod Khanna. I am shocked at his untimely death. May his soul rest in peace,” Naidu said. “His contribution to Indian cinema is tremendous and it will be very difficult to fill the void caused by his untimely death,” he added.

Lok Sabha Speaker Sumitra Mahajan on Thursday said he would be remembered as a perfect gentleman with a perennial smile on his face. “I am deeply saddened to learn about Vinod Khanna’s sad and untimely demise. Besides being a senior and dedicated politician, he was also a versatile actor who mesmerised his admirers across the world as a suave and sensitive actor,” Mahajan said in her condolence message. Noting Khanna was a sitting member of the lower house, she noted that he had also served the nation as a Minister in the Union Council of Ministers and in his fourth stint as MP.

“In his demise, we have lost a capable leader and talented actor, who will be remembered by each one of us as a perfect gentleman with a perennial smile on his face. I convey my condolences to the bereaved members of his family and the large number of his fans,” she said.

It was big loss after Om Puri who died this year. – With arrangement Hindustan Times/Pak Destiny