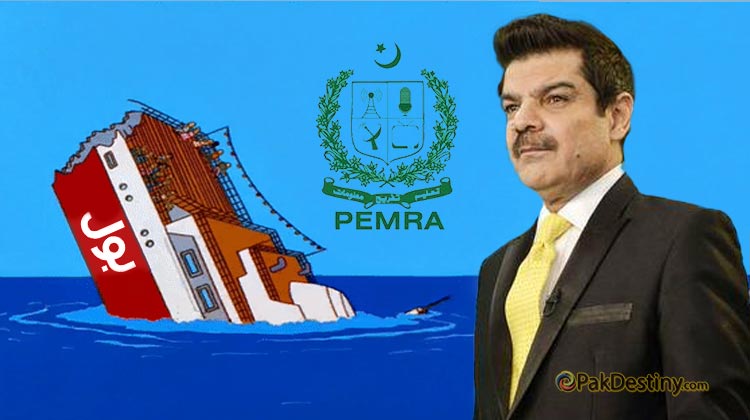 (Pak Destiny) BOL without attaining maturity has landed in hot waters after a number of its employees including its former ace man Mubashir Lucman complained to the Pakistan Electronic Media Regulatory Authority (PEMRA) for recovery of their outstanding dues.

According to the PEMRA, the complaint of anchorperson Mubashar Lucman and his team would be evaluated before initiating action on it.

It said eight others have alleged that BOL News did not pay salaries for six and a half months. Moreover, it is also stated that the medical bill of one female staff is also pending. The Complainants also claimed that the BOL TV Channel management pasted a notice at its entrance barring the complainants from entering the office, to complete their mandatory notice period, which is a violation of the contract.

BOL CEO Sohaib Sheikh has left the country after getting bail in Axact fake degrees case.

The complaints have been forwarded to Council of Complaints, Lahore for appropriate recommendations/disposal in accordance with PEMRA Laws.

BOL CEO Sohaib Sheikh has left the country after getting bail in Axact fake degrees case. Now only handful journalists are working with the BOL. It has not taken back cars from a good number of its employees but also planning to close the venture before its gets mature. – Pak Destiny